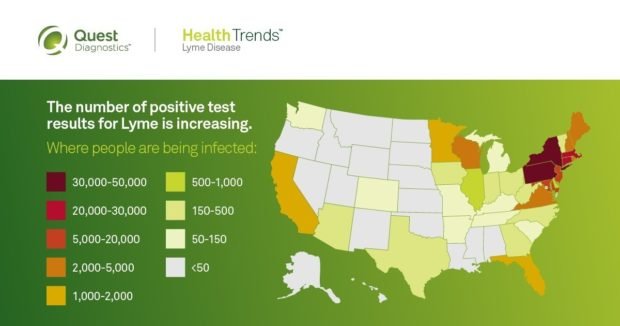 The prevalence of Lyme disease is increasing in the United States, spiking significantly between 2016 and 2017, and has spread to all 50 United States and the District of Columbia, according to a new study released today by Quest Diagnostics (NYSE: DGX).

“Lyme disease is a bigger risk to more people in the United States than ever before,” said Harvey W. Kaufman, M.D., senior medical director for Quest Diagnostics and head of the company’s Health Trends research program. “Our data show that positive results for Lyme are both increasing in number and occurring in geographic areas not historically associated with the disease. We hypothesize that these significant rates of increase may reinforce other research suggesting changing climate conditions that allow ticks to live longer and in more regions may factor into disease risk.”

Spread by tick bites from infected blacklegged and deer ticks, Lyme disease is an infection by the bacterium Borrelia burgdorferi that causes more than 300,000 illnesses each year in the United States, according to the Centers for Disease Control and Prevention (CDC). It is the most commonly occurring vector-borne disease and the sixth most commonly reported notifiable infectious disease.

Common signs of potential Lyme exposure include the tell-tale “bullseye” shaped mark that frequently forms on the skin at a tick-bite location, or a presence of flu-like and/or other symptoms associated with Lyme or tick-borne infections.

Physicians who suspect their patients might have been exposed to the bacteria causing Lyme disease can order laboratory tests to confirm the presence of Lyme or other tick-borne diseases. The Quest Diagnostics Health Trends™ report analyzes results of immunoglobulin G (IgG) antibody testing. This immunoblot test can help identify antibodies produced by the body in response to infection.

In recent years, other tick-borne diseases have emerged in addition to Lyme disease. These conditions may share common symptoms but require different therapies, challenging accurate diagnosis and outcomes. This summer, Quest introduced a new test service that helps identify infection of Lymedisease and four other tick-borne infections from a single patient specimen. This test uses advanced technologies, including qualitative real-time PCR, to identify the DNA of each infectious agent. Quest also offers a test that detects antibodies and if positive or equivocal is confirmed by immunoblot.

Support Conservative Daily News with a small donation via Paypal or credit card that will go towards supporting the news and commentary you've come to appreciate.
Tags
Lyme Disease