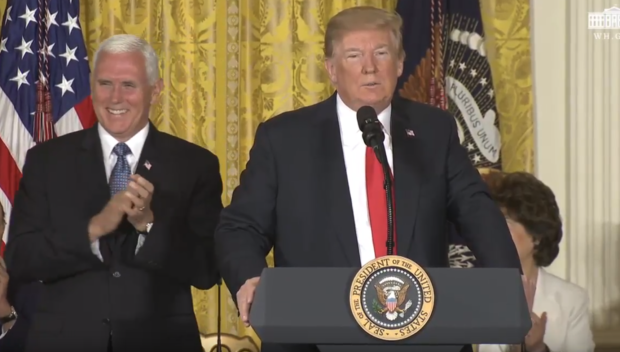 President Donald Trump announced Monday that he has ordered the Department of Defense to create the “Space Force” as the nation’s sixth military branch.

The announcement came during the president’s remarks as he and Vice President Mike Pence attended a meeting of the National Space Council. [Video]

“My administration is reclaiming America’s heritage as the world’s greatest space-faring nation,” he said. “We must have American dominance in space. Very importantly, I’m hereby directing the Department of Defense and Pentagon to immediately begin the process necessary to establish a space force as the sixth branch of the armed forces.”

Trump decried the lack of focus on space in past administrations and said that all that was changing under his leadership.

“For too many years, our dreams of exploration and discovery were really squandered by politics and bureaucracy,” Trump exclaimed. “America’s vital interest in space lost out to special interests in Washington.”

“Now we are ready to begin the next great chapter of American space exploration,” he added.

The president also spoke of space as an opportunity to expand America’s economy and enhance its national security.

“This time [on the moon], we will do more than plant our flag and leave our footprints.  We will establish a long-term presence, expand our economy, and build the foundation for the eventual mission to Mars,” Trump said. “The essence of the American character is to explore new horizons and to tame new frontiers.  But our destiny, beyond the Earth, is not only a matter of national identity, but a matter of national security.”

The infrastructure and technological improvements required to reach the president’s goals will create thousands of jobs and as commercial space companies take advantage of the improvements in space traffic management and enhanced launch facilities, they too will grow to provide thousands more.

“Legions of welders and metalworkers, scientists and engineers stand ready to build a powerful new rocket and gleaming new spaceships,” the president said. “And that goes with all of the other things that we’re building in our country.”

“So all of those rich guys that are dying for our real estate to launch their rockets, we won’t charge you too much,” he added.  “If you beat us to Mars, we’ll be very happy and you’ll be even more famous.”

Trump has ordered his administration to reduce regulations that have not been touched in decades. He hopes to streamline the process for the Space Force and commercial space companies to obtain flight licenses for launches. The administration will also create a state-of-the-art framework for space traffic management.

Support Conservative Daily News with a small donation via Paypal or credit card that will go towards supporting the news and commentary you've come to appreciate.
Tags
National Space Council the Department of Defense the U.S. Space Force Trump Administration