I announced yesterday that my son and I are launching on a “summer of tech” deep learning project using Arduino to sharpen our C programming and electronic circuit building skills.

The first step was to pick an Arduino starter kit and some books to help us along our journey.

We jumped on to Amazon.com and searched the available kits. There were a ton to choose from with a dizzying array of different microcontrollers, included sensors and devices and other electronic components.

We settled on the Elegoo EL-Kit-003 Uno Project Super Starter Kit which includes an Arduino UNO R3 microcontroller, a prototyping board, digital displays, lots of LED’s, resistors and more. 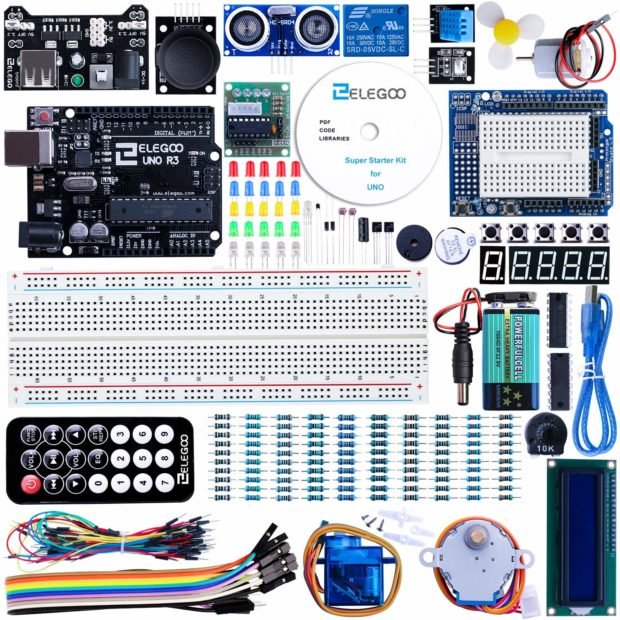 The UNO R3 is a middle-sized Arduino built on the ATmega328P processor with 32KB of programming memory. The board has 6 analog inputs, 14 digital inputs and 6 digital outputs. The ins and outs are how we connect the microcontroller to sensors and other electronic devices. The UNO will be sufficient while we muddle through the included tutorials and our Arduino books. As we advance, we’ll consider the Mega 2560 controller as it has 256kb of program memory and more inputs/outputs – both of which will support the larger, more complicated projects we hope to complete by the end of the summer.

The books we chose to learn about Arduino

There are two major skillsets needed to be an effective Arduino hacker-maker. We need to be effective C programmers and skilled circuit designers and builders. We decided to look for books that seemingly focused on one skill or the other.

For the programming aspect, we picked Richard Blum’s “Arduino Programming in 24 Hours, Sams Teach Yourself“. The book is organized into 24 one-hour “sessions” that teach the basics of C programming for Arduino.

For the building side, we chose Jeremy Blum’s “Exploring Arduino: Tools and Techniques for Engineering Wizardry“.

If you want to join along in our “summer of tech” as we delve into the world of Arduino, feel free to pick up the same kit and books we did. I bought the books for my Kindle Oasis, but they are also available in paperback or for digital download.

Support Conservative Daily News with a small donation via Paypal or credit card that will go towards supporting the news and commentary you've come to appreciate.
Tags
Arduino electronics programming