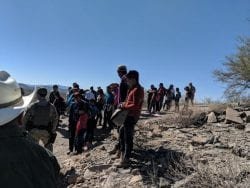 TUCSON, Ariz. – Tucson Sector Border Patrol agents assigned to the Ajo Station arrested a large group of illegal aliens during a heatwave, some in distress, including a pregnant female, west of Lukeville, AZ Friday afternoon.

Agents were alerted to the group’s location after receiving a call from the Sonora, Mexico’s 9-1-1 center relaying information from persons within the group. The callers stated they had crossed the border illegally, and requested assistance.

Ajo Station agents patrolling nearby immediately responded to the area, as well as agents from CBP Air and Marine Operations.

Through the collaborative search effort of CBP assets on the ground and in the air, agents encountered 21 adults, 36 minors, 17 of which were unaccompanied, to include a one-year-old toddler.  The group was comprised of undocumented aliens, from Nicaragua, El Salvador, Guatemala, and Honduras.

Although several appeared to be dehydrated, medically trained agents immediately assessed all the aliens for health concerns and found only one person required further medical attention. An underage pregnant female was provided intravenous fluids by Border Patrol EMT’s for dehydration and is being transported to a local area hospital for further treatment.

All persons found were given water and food, and removed from the 108-degree-temperature stifling the area, to the Ajo Station for processing.

Liberals have largely promoted migrants bringing families illegally into the United States. This attitude leads to situations where immigrants face deadly conditions. If not for the Border Patrol, this group could have suffered serious injuries or death.

Regardless of the unscrupulous and ill regard for human life attitude by smugglers, Border Patrol Agents work tirelessly to ensure not only the safety and security of our nation but also the safety of those who they come in contact with. Due to the extreme heat, Tucson Sector Border Patrol officials warn that summer is an especially dangerous time to be stranded in Arizona’s desert. Anyone in need of emergency assistance should call 9-1-1 immediately as dehydration can be deadly if not treated.

Arizona’s desert is a merciless environment for those unprepared for its remote, harsh terrain and unpredictable weather. The Border Patrol advises anyone in distress to call 9-1-1 or activate a rescue beacon as soon as possible.

Support Conservative Daily News with a small donation via Paypal or credit card that will go towards supporting the news and commentary you've come to appreciate.
Tags
Illegal Aliens Illegal immigration U.S. Customs and Border Protection