The Democratic National Committee (DNC) filed a federal lawsuit Friday against the Russian government, Russian army general staff, Wikileaks, Guccifer 2.0, Donald Trump and many others over emails and documents hacked during the 2016 presidential race.

The multi-million dollar lawsuit lists statutes covering everything from trespassing to RICO conspiracy as the DNC looks to blame the Trump campaign and Russia for undermining the DNC’s efforts to get Hillary Clinton elected. 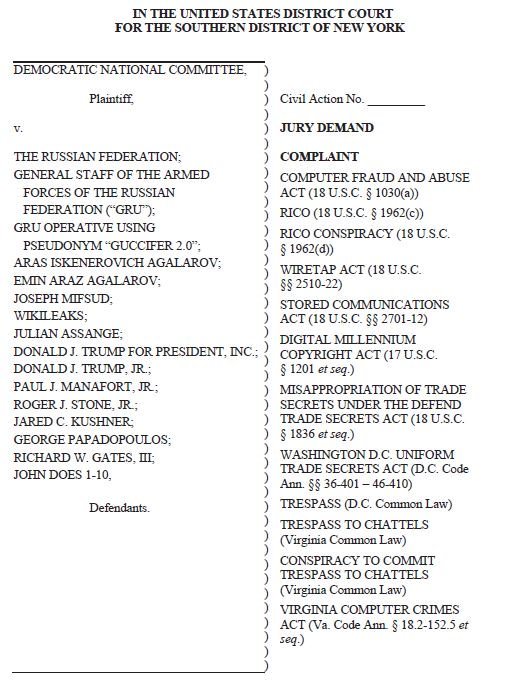 “During the 2016 presidential campaign, Russia launched an all-out assault on our democracy, and it found a willing and active partner in Donald Trump’s campaign,” DNC Chairman Tom Perez said in a statement. “This constituted an act of unprecedented treachery: the campaign of a nominee for President of the United States in league with a hostile foreign power to bolster its own chance to win the presidency.”

The Democrats do not name President Trump in the suit, but did name his son and other campaign associates that met with people affiliated with the Russian Federation or WikiLeaks.

Forensic analysis, carried out by Crowdstrike, is cited in the suit saying that the DNC’s systems were breached on July 27, 2015 and again on April 18, 2016 by a pair of hackers with the code names “Cozy Bear” and “Fancy Bear”. The emails and documents were allegedly downloaded on April 22, 2016.

WikiLeaks made the documents public in July of 2016, but the organization’s founder, Julian Assange, has said that he did not get them from Russians. Many believe that murdered DNC staffer Seth Rich as responsible for downloading and handing the data to WikiLeaks in retribution for the party’s snub of Bernie Sanders during the primary election campaign.

By tying Trump associates to the hacking, the DNC hopes to add to the legal jeopardy of those around the president and extend the Trump-Russia narrative through the 2018 midterm elections.