Top technology talent may be in high demand, but that doesn’t mean IT job seekers can skate through the application process. In a survey conducted by staffing firm Robert Half Technology, CIOs shared what they consider to be deal breakers when evaluating candidates for open roles.

Technology executives said the biggest resume red flags are frequent job hopping (21 percent); poor formatting, sloppiness or typos (17 percent); and too much unnecessary information (17 percent). Making it to the interview stage comes with its own set of potential pitfalls. According to CIOs, the biggest blunder is speaking negatively about past employers or managers (20 percent), followed by poor body language (19 percent) and being unprepared for technical questions (16 percent).

CIOs were asked, “When reviewing resumes, which of the following would most likely cause you to remove a candidate from consideration?”

CIOs were also asked, “When conducting an in-person interview, which of the following would most likely cause you to remove a candidate from consideration?”

“It’s a candidate’s market in technology right now, but that doesn’t mean applicants can sit back and wait for offers to roll in,” said Jeff Weber, executive director of Robert Half Technology. “Job seekers should tailor resumes that highlight specific skills and experience related to the open position and be prepared to answer technical questions during interviews in order to make an impression with potential employers.”

Weber added that while frequent job changes may be more common in today’s technology workforce, some employers are wary of hiring applicants with a long list of short stints. “Hiring and onboarding a new employee takes significant time and resources, and organizations want to avoid investing in someone who may jump ship if another opportunity comes along.” 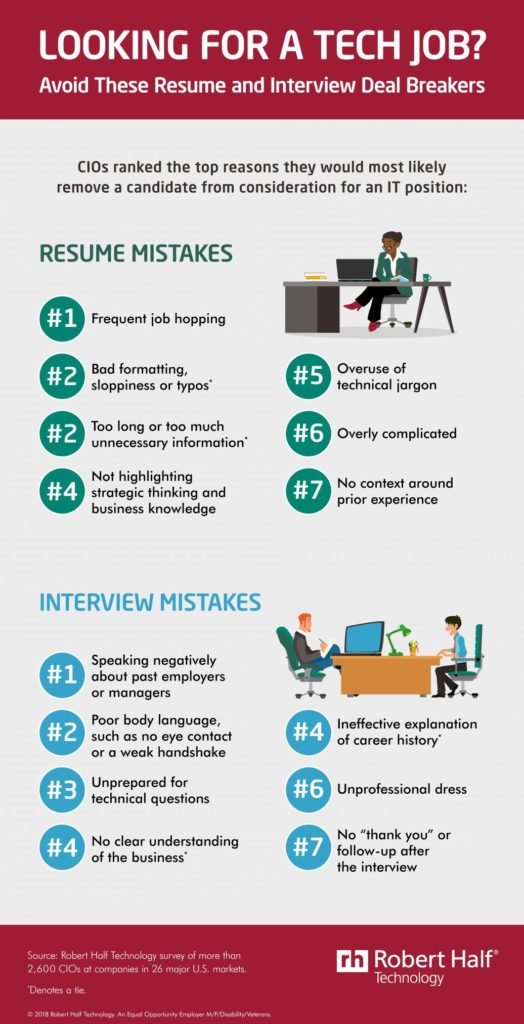