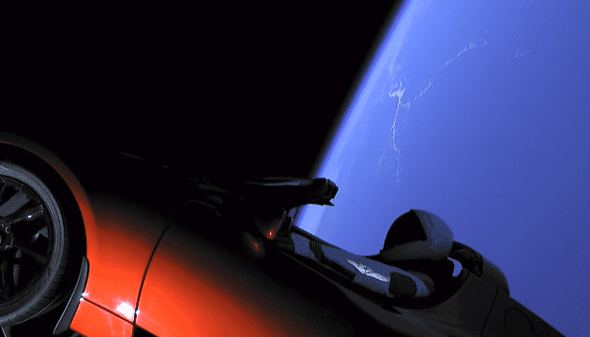 SpaceX has scheduled the first Falcon Heavy launch for Tuesday the goal of which is to put CEO Elon Musk‘s midnight-cherry red Tesla Roadster in an orbit going between Earth and Mars repeatedly.

The Falcon Heavy launch would place the Roadster into a heliocentric orbit, meaning that like the planets and comets and so on, it will be orbiting the sun. More specifically, the Muskmobile will go into a type of heliocentric orbit called Trans-Mars injection, which is the easiest and least energy-intensive way to move objects back and forth between Earth and Mars.

In anticipation of a successful launch, SpaceX released an animation set to Bowie’s “Life on Mars” showing the launch, booster separation and return and the Roadster’s entry into Mars orbit.

When Falcon Heavy lifts off, originally scheduled for 1:30 p.m. EST, it will be the most powerful operational rocket in the world by a factor of two. With the ability to lift into orbit nearly 64 metric tons (141,000 lb)—a mass greater than a 737 jetliner loaded with passengers, crew, luggage and fuel–Falcon Heavy can lift more than twice the payload of the next closest operational vehicle, the Delta IV Heavy, at one-third the cost.

Following liftoff, the two side boosters separate from the center core and return to landing sites for future reuse. The center core, traveling further and faster than the side boosters, also returns for reuse, but lands on a drone ship located in the Atlantic Ocean.

Musk has kept expectations low for the maiden launch of the Falcon Heavy saying that it could just blow up.

“It will be a really huge downer if it blows up but hopefully, if something goes wrong, it goes wrong far into the mission so we at least learn something along the way,” Musk said.

Whether successful or catastrophic, the launch will be one for the ages.

“I am sure we have done everything we could do to maximize the chances of success for this mission,” Musk said Monday during a prelaunch news conference. “Once you have done everything you can think of, if it still goes wrong, there is not much more you could have done. I feel at peace with that.”

The Falcon Heavy is a stepping stone to the BFR, the Big F’in Rocket, planned for mid 2020 launch which is expected to take people and supplies to Mars and back.

Magnolia Trees to Bring Cheer in Your Front Yard