Many job postings close with a statement indicating salary is negotiable, but how often do job seekers speak up to secure a better package? According to a survey from global staffing firm Robert Half, 39 percent of workers tried to negotiate a higher salary with their last job offer. Among people in the 27 U.S. cities surveyed, those in New York (55 percent), Dallas (51 percent) and San Francisco (50 percent) were most likely to ask for more pay. 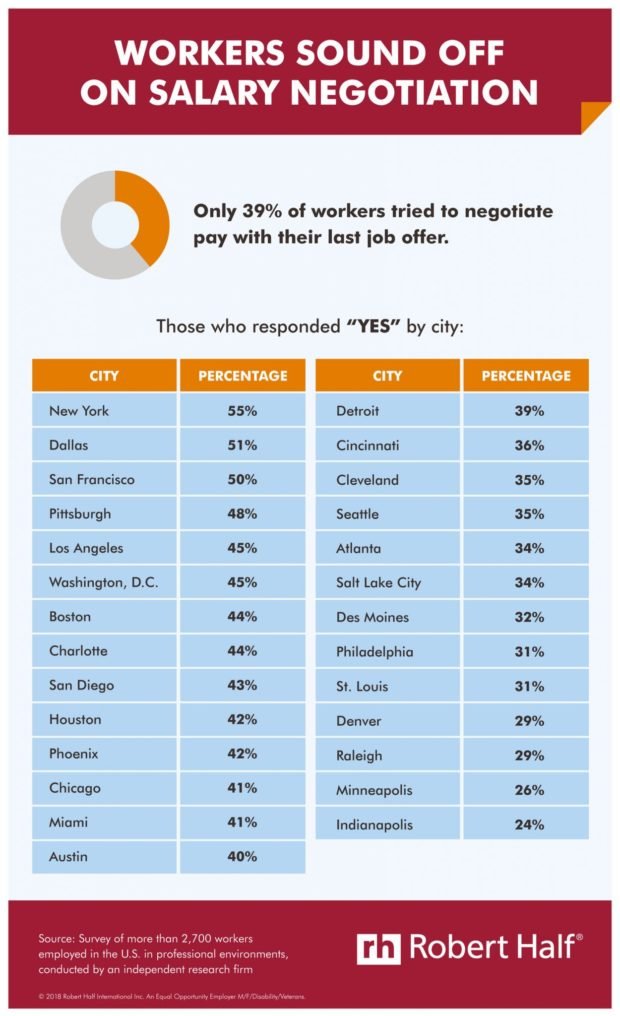 Respondents were asked, “Thinking of your last job offer, did you try to negotiate for higher pay?” Their responses:

Those who responded “Yes” by city:

A previous study by Robert Half, Confidence Matters, revealed worker confidence levels in talking money with their employers: 54 percent of workers surveyed felt comfortable negotiating pay in a new job, compared to 49 percent who felt confident asking for a raise in their current role. Both figures marked an increase over the previous year’s survey results.

Paul McDonald, senior executive director at Robert Half, noted that employers are broaching the subject of salary expectations earlier in interviews to streamline the hiring process. He alerted job seekers to two common pitfalls: “First and foremost, avoid negotiating any part of the compensation package until after you’ve received a formal offer. Second, don’t go into a negotiation without practicing the conversation in person with a trusted friend or mentor. Someone who has been in your position can help you prepare for the unexpected and make a stronger case.”

Legislation in many cities and states now prohibits employers from asking candidates about their salary history. This development has removed a long-standing question from the start of the hiring process and forced employers and job seekers to shift their approach to determining compensation. Added McDonald, “Starting salary should be a factor of the job skills required and current market demand for those skills. That’s why it’s more important than ever for both parties to research market conditions thoroughly to pave the way for realistic, productive discussions.”