Experts said that President Donald Trump could not reinvigorate the coal industry with his deregulatory agenda – they were wrong.

The Economist tweeted that “There is no reason to expect that Donald Trump’s decision will invigorate coal mining, as he claims it will”

There is no reason to expect that Donald Trump's decision will invigorate coal mining, as he claims it will https://t.co/IqRYmuUE1D pic.twitter.com/72eG9P3dI7

Forbe’s published an opinion piece titled “Trump’s Power Plays Won’t Save Coal Or Help Business” in which the author outlines actions by the administration then brazenly claims that they won’t work.

“Hogwash. These actions won’t save coal or help business,” Diane Regas wrote. “On the contrary, they represent a war on all Americans, threatening both the environment and the economy.”

The outcries were primarily levied at President Trump’s decision to end the war on coal. On Oct. 10, EPA Administrator Scott Pruitt signed an order to rescind President Obama’s signature Clean Power Plan, which was designed to fight climate change by reducing carbon emissions from U.S. power plants. “The war on coal is over,” Pruitt said.

A Reuters commentary in October said that the repeal of burdensome regulations “won’t get Trump what he wants.”

“Republicans say that deregulating carbon pollution will revive the coal industry, but it won’t,” Ben Adler wrote in the article.

So now, just a few short months after Pruitt took the actions ordered by Trump, how are things going for the coal industry?

The U.S. Energy Information Administration announced that coal production for the most recent period is up 3.2% year-over-year and that coal production for 2017 was up 6.4% when compared to 2016. Even more important is the coal region most positively impacted was Appalachia – the area hardest hit by former President Obama’s attacks on the industry.

As the United States experiences its coldest winter in recent memory, coal plants have had to take up the slack as renewable power generation and gas plants are unable to keep pace with America’s energy needs.

Coal-fired power plants are king again as sub-zero temperatures sent demand for heating and electricity soaring on the East Coast Friday in the largest energy market in the nation.

Coal outpaced both natural gas and nuclear power plants in the PJM market, which extends from the Midwest to Washington, according to real-time updates provided by the grid operator PJM Interconnection.

The coal industry Obama fought a war against is on the rebound and a proposal by Energy Secretary Rick Perry could put coal back on a level playing field with gas and renewables – who are predictably fighting it.

The proposal is being considered by the Federal Energy Regulatory Commission, which intends to vote on the proposal in January. The proposal was supposed to be approved this month, but the commission’s newly appointed chairman, Kevin McIntyre, said he required an additional 30 days. The plan is being adamantly opposed by scores of industry groups from the oil sector to renewables.

The haters keep on hating, but the coal industry is seeing a continuing uptrend in hiring for the first time since Obama began his war on coal in earnest in 2012. 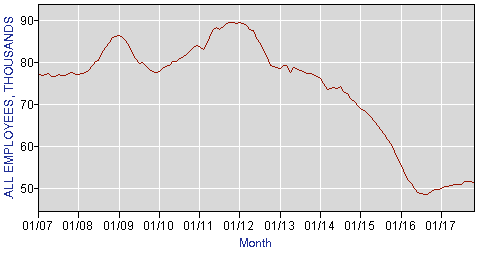 Through October 2017, the most recent period with non-preliminary numbers, the coal industry has added 1,700 jobs. The new numbers are in sharp contrast to 2012 when 10,000 industry jobs were lost and 2016 where another 5,800 coal industry workers ended up in the unemployment line. The reversal is a welcome comfort to those that Obama forgot.

Exports tell an even more promising story. The U.S. exported 9.16 million short tons of coal in October 2017 up from 6.55 million in November 2016. With a chart this positive, 2018 is set to be amazing for those working coal and a not so great for those betting against it. 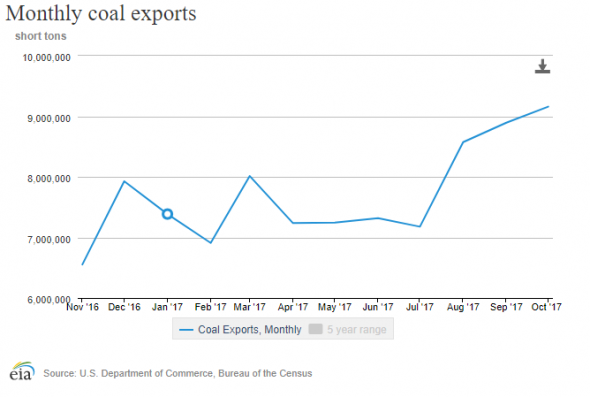 Support Conservative Daily News with a small donation via Paypal or credit card that will go towards supporting the news and commentary you've come to appreciate.
Tags
Coal the economy