The current controversy involving granting amnesty to approximately 800,000 Delayed Accountability for Contemptuous Aliens (DACA) is nowhere near the end of demands to appease mass lawbreakers.

The people who naïvely think that after the DACA surge is legalized the country can get back to normal are the real dreamers. Unchaining those demonstrators from the furniture in Congressional offices and TV studios only makes room for the next shift of disgruntled illegals to take their place. 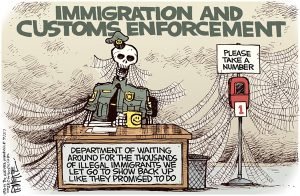 The DACA surrender is just the beginning.

The cultural Marxists in charge of the media, academia, commerce and government are, for the most part, convinced blanket amnesty for illegals is the way to go and the sooner the better. It’s those pesky and unenlightened citizens who’re the problem. Telling the truth, that amnesty for illegals rewards lawbreaking and creates incentives for following waves of illegals expecting the same give–away, produces a negative response.

That’s why descriptions of the problem use touchy–feely, focus–group language to hide the facts.

Which brings us to another ‘reform’ proposal. The Immigrant Tax Inquiry Group has a Five + Five plan that is supposed to “Enable Unauthorized Immigrants to Generate More Tax Revenue.”

Any ‘reform’ that relies on misleading adjectives makes me suspicious. What’s an “unauthorized immigrant”? Is it someone who innocently wandered into an area that’s off limits, like the employee breakroom at Costco? Or is it someone who intentionally crossed the border into a nation where he had no right to be?

And why would immigrants need a Tax Inquiry Group in the first place? Legal immigrants are covered by the same tax laws as the rest of us.

The questions answer themselves. So, misleading adjectives aside, how does the program work? Does Five + Five = immigration pacification?

The program is a pay–as–you–go amnesty described as a tax that’s split equally between employee and employer. The attraction for Juan is he doesn’t have to flee routine traffic stops anymore. The attraction for his employer is Juan is paying half the tax.

And there, I suspect, is the real motive for Five + Five and the reason ITIG doesn’t list its donors. It’s a ‘guest worker’ program that outsources the cost to taxpayers and while the benefits go to the employers.

ITIG was unintentionally candid, “The small tax is reasonable, as employers have traditionally paid unauthorized workers 25 percent less than others, and these workers do jobs others are unwilling to do. The employer still receives a 20 percent wage advantage over other legal workers, including those whose country of origin is the U.S.”

For the first time in history serfs pay for the privilege of bringing their wage scale north! Employers do even better. They can now legally discriminate against citizens in favor of cheap foreign workers. It’s a win–win, unless you’re a citizen who would be willing to do US jobs for US wages.

After agreeing to pay the tax the illegal is granted a REALcard. This lets Juan be a member of Uncle Sam’s Club. He can work in the US legally, qualify for Medicaid, take English language classes, enjoy “continuing education,” apply for a visa, apply for a driver’s license and “other benefits.” And just like a Sam’s Club card, the whole family can share his membership for one low price!

The REALcard is good for ten years or until Democrats take control of Congress and grant mass amnesty to these “second–class citizens.”

ITIG claims the program will generate $210 billion in new tax revenue over ten years, but I have my doubts. Let’s say Juan is making $40,000 a year and has two anchor babies. Five percent of the gross is $2,000, but that is much less than the $5,616 he qualifies for when he can legally claim the Child Tax Credit.

And that’s just one of many questions the plan generates that unfortunately will remain unanswered. After initially insisting I interview ITIG Founder Mark Jason, the interview was canceled after it became evident I wasn’t an open borders cheerleader.

Possibly Jason thinks Five + Five is an equitable solution that is fair to everyone. I don’t. Rewarding lawbreakers only encourages other lawbreakers. The fact illegals haven’t been caught doesn’t give them a claim on our compassion. As far as I’m concerned, a sincerely held believe that in the end is bad for the country is no improvement over an outright malign belief that actively seeks do to harm to the country.