A train, chartered for Republican lawmakers heading a retreat in West Virginia, struck a truck crossing the tracks in Crozet, WV, on Wednesday killing one person and injuring at least two others. 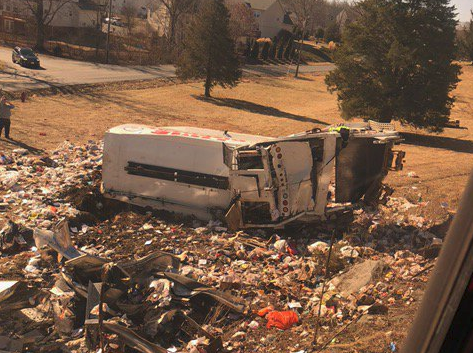 Both the seriously injured and deceased persons were on the truck but a third, Rep Jason Lewis (R-MN), was taken to a local hospital and is undergoing concussion testing at a nearby hospital, according to his office. There was reportedly a third person in the truck, but the condition or whereabouts of that person have not been released.

“I’m fine compared to, tragically, the truck drivers, and thankful for the prompt action of our doctors and first responders. My thoughts are with the family of the individual who passed away,” Lewis said in a tweeted statement.

The seriously injured person was transported to a hospital by LifeFlight.

Republican House and Senate members were heading to their annual retreat at the Greenbrier, a resort in Sulphur Springs, West Virginia where they meet to plan their agenda for the current year. Members of their families, including children, were also on the train.

The Congressional Insitute issued a statement saying that the retreat will go on and that they will now include a moment of silence for those involved in the incident and a security briefing. President Donald Trump and Vice President Michael Pence will join the retreat later.

House Speaker Paul Ryan (R-WI) expressed sorrow and offered his prayers for all those involved.

“Today’s incident was a terrible tragedy,” Ryan tweeted. “We are grateful for the first responders who rushed to the scene and we pray for the victims and their families. May they all be in our thoughts right now.”

Today’s incident was a terrible tragedy. We are grateful for the first responders who rushed to the scene and we pray for the victims and their families. May they all be in our thoughts right now.

Support Conservative Daily News with a small donation via Paypal or credit card that will go towards supporting the news and commentary you've come to appreciate.
Tags
Crozet train wreck West Virginia