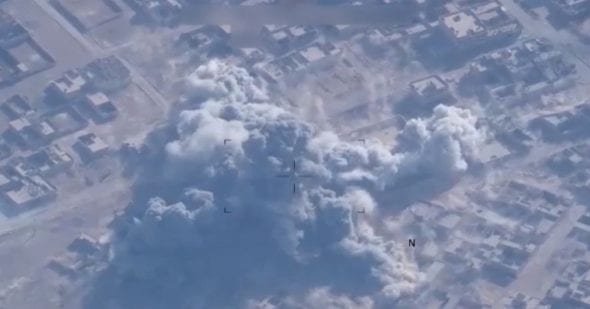 The strikes, launched Saturday amid a government shutdown in Washington, targeted an ISIS command and control center in As Shafah, one of the terror group’s last remaining enclaves in Syria’s Euphrates River Valley.

The ISIS camp contained a “heavy concentration” of fighters who appeared to be “massing for movement,” according to a statement from Operation Inherent Resolve (OIR), the U.S.-led coalition to defeat ISIS.

Syrian Democratic Forces, who are doing the bulk of the fighting against the hardcore remnants of the ISIS “caliphate” in Syria, assisted in target observation prior to the airstrikes, OIR said.

“Our SDF partners are still making daily progress and sacrifices, and together we are still finding, targeting and killing ISIS terrorists intent on keeping their extremist hold on the region,” said Maj. Gen. James Jarrad, commanding general of Special Operations Joint Task Force – Operation Inherent Resolve. “We cannot take our focus off our mission, and we must not lose our momentum in taking these terrorists off the battlefield and preventing them from resurfacing somewhere else.”

The strike comes as the U.S.-led coalition, along with a separate offensive by the Russian-backed Syrian government, is coming close to completely retaking all the territory seized by ISIS during Syria’s ongoing civil war. ISIS has lost 98 percent of the physical territory it once claimed as a part of its caliphate, OIR officials say.

U.S. military commanders say ISIS still retains the ability to concentrate fighters and carry out terror attacks in Syria, despite the loss of most of its territory.

“The strikes underscore our assertion that the fight to liberate Syria is far from over,” Jarrad said.

The Trump administration is using the threat of an ISIS revival as one of its main justifications for a long-term presence in Syria.  Secretary of State Rex Tillerson said last week that the U.S. would continue training local defense forces, composed mainly of Syrian Kurds, to prevent the return of ISIS and counter Iranian ambitions in the country.

Support Conservative Daily News with a small donation via Paypal or credit card that will go towards supporting the news and commentary you've come to appreciate.
Tags
Airstrikes ISIS Syria Trump Administration