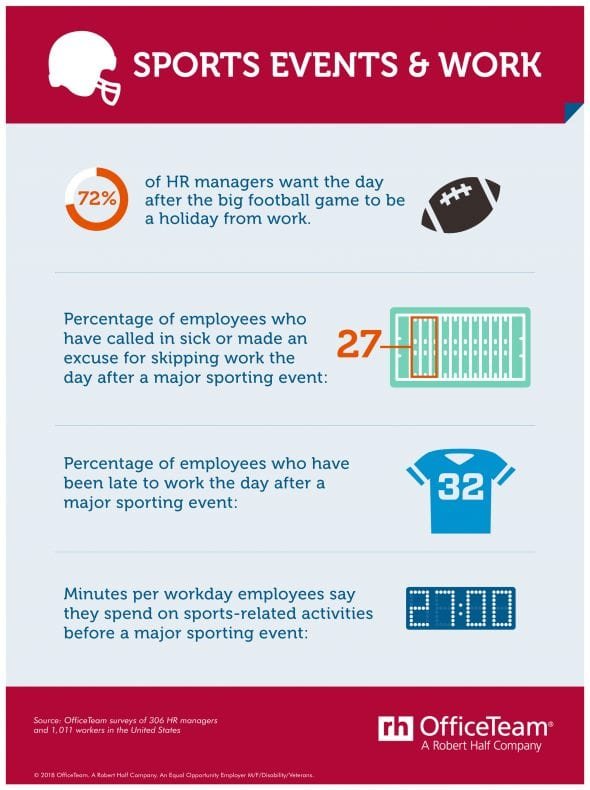 A new survey shows that 72 percent of HR managers think the day after the NFL championship game should be a paid national holiday from work. That may not be a bad idea considering more than one-quarter of employees (27 percent) admitted they’ve called in sick or made an excuse for skipping work following a major sporting event, such as the Super Bowl, NBA Finals or World Series. Nearly one-third of professionals (32 percent) have been tardy to the office the day after watching a big game.

In the OfficeTeam survey, HR managers were asked, “On the day after which of the following major events, if it were on a weekday, would you most like to see a paid national holiday from work?” Their responses:

*Responses do not total 100 percent due to rounding.

“There’s understandably a lot of excitement both in and out of the office surrounding major sporting events,” said Brandi Britton, a district president for OfficeTeam. “It’s not always practical for organizations to give employees the day off after a big game, but allowing a little leeway in the morning could help. Companies can also organize activities beforehand to capitalize on the enthusiasm and build camaraderie.”

Britton added, “All professionals need opportunities to relax and recharge. To keep projects on track during popular events, employers should ask staff to make time-off requests early if they want to enjoy a game and bring in interim workers for absences.”

Support Conservative Daily News with a small donation via Paypal or credit card that will go towards supporting the news and commentary you've come to appreciate.
Tags
Sports the Super Bowl