Last night, Coldplay completed their massive, sold out “A Head Full Of Dreams Tour” in Buenos Aires, Argentina, making it the most successful worldwide outing of their career. Produced by Live Nation, it topped out as the third highest grossing global tour of all time with $523,033,675 in ticket sales.  Since its highly anticipated kickoff in March 2016, following Coldplay’s headline performance at the Super Bowl 50 Halftime Show, the band has played for a staggering 5,389,586 million fans on their “A Head Full of Dreams Tour.” The GRAMMY® Award-winning, multi-platinum band has illuminated the globe with an incredible 114 shows in 76 cities and 31 countries, with two legs in Latin America, two in Europe, two in North America, one in Australia, and one in Asia. 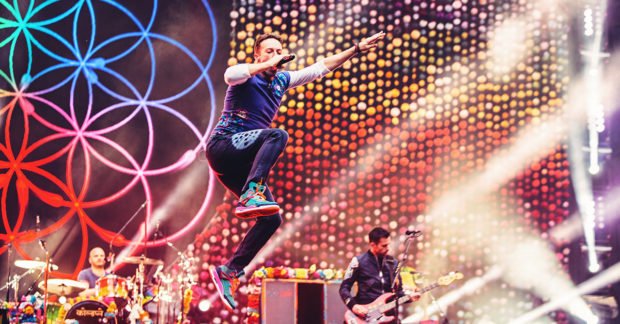 The “A Head Full of Dreams Tour” concert experience has been heralded “a Technicolor feast for the eyes” (Miami New Times) with its extensive visuals including a one-of-a-kind laser show, confetti cannons, awe-striking pyrotechnics, and interactive light-up LED wristbands for fans.

A Head Full Of Dreams is Coldplay’s seventh album and sold more than six million copies since its December 2015 release. The videos for the album’s hit singles – “Adventure Of A Lifetime,” “Hymn For The Weekend,” and “Up&Up” – have more than 1.5 billion YouTube video views combined. The album reached Number One on iTunes in more than 90 countries and the band has won seven Grammy awards.

Support Conservative Daily News with a small donation via Paypal or credit card that will go towards supporting the news and commentary you've come to appreciate.
Tags
Coldplay Music