Fewer Americans will talk about politics or football at the Thanksgiving table this year, while 96 percent of those dinners will still feature turkey. 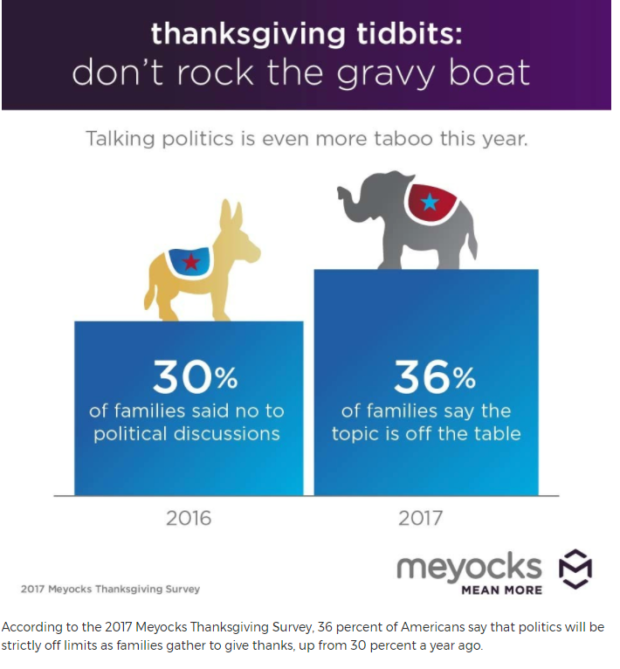 “Fewer Americans will talk politics or football – perhaps because football has become more political,” says Doug Jeske, president of Meyocks, the branding firm that conducted the survey. “Kneeling protests during the National Anthem may be further dividing the country, but we can apparently still agree on turkey – whether the home is rural or urban or in a red or blue state.”

If you’re lucky enough to be at a Thanksgiving meal that features pie, it’s most likely you will be served pumpkin (44 percent), followed by apple (29 percent) and pecan (19 percent).

Family continues to be the number one reason to give thanks – and the second-largest stressor of the holiday, according to the Meyocks study. Perhaps not so coincidentally, in more than a third of homes (35 percent), families will allow phones and tablets as a distraction at the Thanksgiving table.

“Unfortunately, we may use our technology to get away from the family member across the table,” Jeske says, “or we just may be getting started on holiday shopping.”

According to the survey, 34 percent of Americans plan to shop for something other than items for the holiday meal on Thanksgiving Day, and 26 percent will shop at a brick-and-mortar store.

Black Friday, however, remains a bigger shopping day. More people will shop online (53 percent) than in-store (37 percent), and the most popular time to shop in-store on Black Friday is between 6 a.m. and noon.

Most Americans (71 percent) shop for the sales on Thanksgiving Day or Black Friday, but nearly a quarter (24 percent) point to the social aspects of shopping. Most shoppers (66 percent) are shopping for others, but more than a third (34 percent) have their own needs in mind.

Support Conservative Daily News with a small donation via Paypal or credit card that will go towards supporting the news and commentary you've come to appreciate.
Tags
football Politics Thanksgiving