The National Hurricane Center’s tropical outlook for the weekend includes Tropical Storm Nate which could make landfall in either southeast Louisiana, the Mississippi coast, or southwest Alabama Sunday morning. 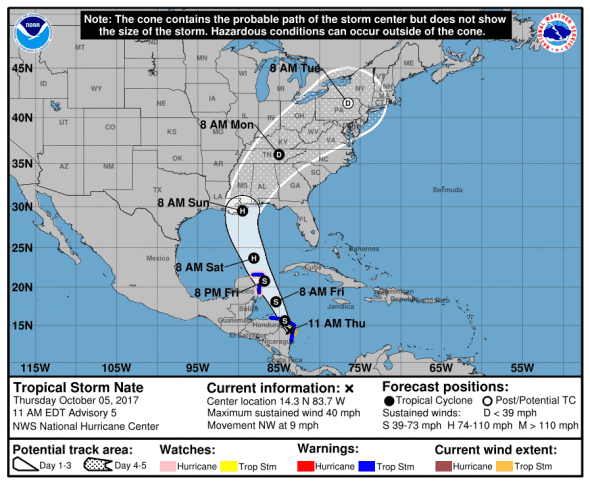 According to the NWS cone of uncertainty, Nate could make landfall near or at New Orleans as a category one hurricane or the storm could turn earlier moving the track east towards Mississippi or Alabama. U.S. landfall is still 3 days away so the storm’s track could move anywhere within the cone.

Nate is currently located at 14.3N, 83.7W with maximum sustained winds of 40 mph. The storm is moving north-northwest at 9 mph and will cross the Yucatan Penninsula late Friday or early Saturday before entering the Gulf of Mexico and heading for the U.S. Tropical-storm-force winds extend outward up to 60 miles (95 km) mainly over water to the east of the center.

The National Weather Service has issued tropical storm warnings for coastal Nicaragua and Honduras and a hurricane watch for Mexico from Punta Herrero to Rio Lagartos.

The storm will traverse the warm waters of the northwestern Caribbean Sea, where the upper-level environment is also forecast to be conducive for strengthening. However, the amount
of strengthening is likely to depend on the structure of the inner core after it crosses land. The intensity models have continued their downward trend, but the NHC forecast remains near the higher side of the guidance due to these favorable conditions and persistence from the previous advisory. Some additional strengthening is possible while the system moves over the southern
and central Gulf of Mexico, and the NHC intensity forecast brings the system to hurricane strength within 72 hours.

Support Conservative Daily News with a small donation via Paypal or credit card that will go towards supporting the news and commentary you've come to appreciate.
Tags
Nate The Weather tropical storm