“The hoax has been reversed. This is the Watergate of today’s times.”—Donald Trump

“After all this is settled the people will forget all about Watergate “– Sebastian Gorka, former advisor to Trump.

On the heels of an explosive report alleging that the Hillary Clinton campaign helped pay for that infamous Trump-Russia dossier, known in some circles as the “golden showers dossier,” two New York Times reporters have publicly accused Clinton’s campaign lawyer, Marc Elias, of lying to them about funding the research. When the N.Y. Times starts believing the truth about Hillary you know something is up.

The report published by The Washington Post on Tuesday revealed that Elias’ law firm hired opposition research firm Fusion GPS to dig up dirt on then-presidential candidate Donald Trump. The infamous “golden showers” dossier alleged that Trump had personal ties to Russia, had colluded with them to harm Hillary’s campaign, and engaged in unsavory sexual practices with Russian hookers when visiting the country. When BuzzFeed published the dossier without confirming the dossier’s veracity, the information within was largely regarded by intelligence experts as untrustworthy. Standard operating procedure was the Russians buying the Clintons.

Hillary Clinton’s campaign and the Democratic National Committee allegedly violated campaign finance law by failing to disclose payments for a dossier on Donald Trump, according to a complaint filed Wednesday with the Federal Election Commission.

The complaint from the nonprofit Campaign Legal Center said Democrats effectively hid the payments from public scrutiny, contrary to federal law which requires campaign and party committees to disclose the reason money is spent and to whom it is paid.

Media reports on Tuesday alleged that a lawyer for the Clinton campaign hired Fusion GPS to investigate Mr. Trump in April 2016. The private research firm reportedly hired Christopher Steele, a former British spy with ties to the FBI, to conduct the opposition research, and he compiled a dossier containing allegations about Mr. Trump’s connections to Russia.The Clinton campaign and the DNC funded the effort until the end of October 2016, just days before the election.

President Trump, in a wide-ranging sparring session with reporters Wednesday afternoon, blasted Hillary Clinton over new revelations her campaign helped fund a salacious anti-Trump dossier last year – calling the project a “disgrace” and claiming the tables have turned on Democrats over the “Russia hoax.”

“They’re embarrassed by it, but I think it’s a disgrace,” Trump told reporters, before heading to Texas for a briefing on Hurricane Harvey recovery efforts and a Republican fundraiser. “It’s a very sad commentary on politics in this country.”

There is no and will never be any evidence of Trump/Russia collusion. That story is over. The real collusion happened on the Democratic party side.

Buzzfeed and CNN were quick to run the ‘Golden showers’ dossier but didn’t dig to find out where it came from.

This is the problem with ‘fake news’. It’s not that stories are made up (though that is sometimes the case) it’s that the Media has taken sides and refuses to report on anything that would tarnish the halo of a Democrat.

The Media is now being forced to admit that it was the DNC and the Clinton campaign that helped pay for that notorious dossier.

That’s not unusual, political campaigns do that, but it’s the salaciousness of what was in that Fake News dossier that makes one wonder how anyone could have taken it seriously. I never believed it for a second when I heard about the prostitutes urinating on the bed for Trump, but the majority of Trump haters, DNC, and media all went along with it.

Democrats, particularly the Clintons, are the most lawless group of people in America. Their activities amount to a political mafia. They extort, get dirt on people and blackmail, corrupt the system from within, bribe and conduct pay for play schemes, engage in fraudulent vote schemes to get elected and engage in criminal activity constantly. And when the facts of their guilt do come out, the FBI and Judicial Branch cover for them.

Robert Mueller, Rosenstein, Eric Holder and the FBI may all have known about the issues with the pending sale of Uranium One, which owned 20% of uranium reserves in the United States, to Russia.  Kickbacks to the Clinton Foundation, bribery, extortion and money laundering were all involved in the sale and the Clintons were in the middle of it all.

All Hillary does is pile lies on top of lies and some in the media do not even care to investigate. Nothing is ever her fault and that sums it up!

On Monday John Solomon from Circa News told Sean Hannity the FBI has emails, audio and video tapes by a US agent of Russian efforts to win favor with the Clintons in the Uranium One scandal.

President Obama received information on Russia’s criminal plot to corner the market on uranium in his daily briefings.
Yet the Obama administration approved the sale of one-fifth of American uranium to the Russians anyway!

The short version of the scandal is this: While Hillary Clinton was secretary of state and partially responsible for vetting the Uranium One deal’s potential impact on the U.S., federal officials learned that Russian “nuclear industry officials were engaged in bribery, kickbacks, extortion and money laundering designed to grow Vladimir Putin’s atomic energy business inside the United States…” Unsurprisingly, that was around the same time former President Bill Clinton was raking in big bucks through the Clinton Family Foundation from…. Russian nuclear officials. That meeting between President Clinton and former Attorney General Loretta Lynch almost certainly had nothing to do with grandchildren. That’s what they claimed– and that would be pretty innocent. But if that’s what Clinton and Lynch discussed, the former AG probably wouldn’t have been so shy about talking about the meeting when she appeared before congressional investigators last week.

Lynch appeared before the House Intelligence Committee to talk about Russian and Trump and collusion ahead of the 2016 election. There’s still no real evidence.

I wonder if this case will go anywhere? They all belong in jail, but will they ever go there? I Doubt it.

Greg Jarret, attorney for Fox News, said there are 13 crimes Hilary can be charged with. Six anti-corruption statutes which are felonies, racketeering for using her charity as a criminal enterprise, all the e-mail crimes, two of which are under the espionage act and now the dossier which she and the DNC  hid in their disclosure statements. Everyone knew this was going on yet they all stood by and let it happen and the money went back to the Clintons.

Donald Trump Jr. took quite a beating from the fake news media after it was revealed he met with Russian lawyer Natalia Veselnitskaya in June of 2016.

After Wapo revealed that Hillary’s camp paid for the Russian dossier, the media went into spin mode to downplay yet ANOTHER Clinton scandal. Media sycophants brush off this story calling it ‘standard oppo research’.

On MNSBC, Megan Murphy of Bloomberg said not to worry about who paid for the dossier because it’s standard oppo research and we should instead be focusing on Trump’s connections to Russia (with ZERO evidence).

CNN contributor Adam Entous called the dossier “standard practice.” after CNN’s John Berman said the intelligence community corroborated a lot of the information that has been in there to begin with.”

None of these liberals can actually say what parts of this garbage dossier have actually been confirmed to be true.

So let me get this straight. The Trump’s doing oppo research where nothing was actually exchanged is “treason”, but Hillary paying for a Russian dossier full of lies which potentially led to a FISA warrant and wiretapping of her opponent’s camp and selling 20% of our uranium to Russia is ‘standard practice’. Got it.

If Hillary is so concerned about Trump and Russia then why did she allow Bill to get $500,000 for a speech over there? Why did she allow the sale of 20% of our uranium to Russia thus selling out our security and putting the lives of every man, woman, and child in jeopardy and why did she fund the fake Russian dossier on Trump? Oh what a tangled web she weaves when trying to deceive. 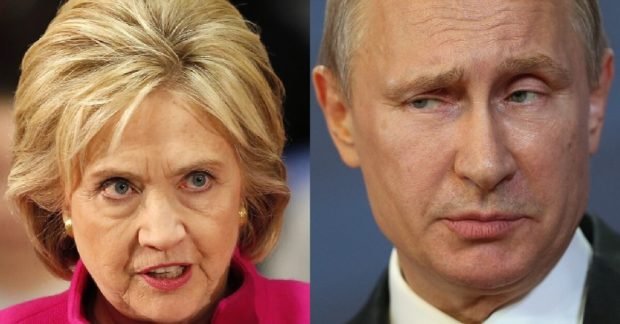 Support Conservative Daily News with a small donation via Paypal or credit card that will go towards supporting the news and commentary you've come to appreciate.
Tags
Hillary Clinton Russia the Steele dossier Uranium One