Bump fire stocks allowed Stephen Paddock, the Vegas gunman who killed 58 people and injured almost 500 more, to fire semi-automatic rifles at cyclic rates similar to fully automatic versions. Politicians’ and media’s fixation on the legal, for now, devices are creating a rush on them.

Firearms distributors have run out of the devices as gun owners rush to buy them ahead of a possible ban on the easily-installed systems that can allow a semi-auto AR-15 to fire more than 500 rounds per minute.

While machine guns are heavily regulated and require a lengthy paperwork and review process to obtain, bump fire stocks are attachments that use a gun’s recoil and the shooter’s shoulder to achieve rapid fire. Machine guns, for those who can even get them, can cost more than $20,000 while the bump stock systems regularly sell for between $90 and $300.

An entire industry popped-up around these devices and its now seeing record demand. Bump Fire Systems’ website was down due to an overloaded server and a better-known maker of bump fire stocks, Slide Fire Solutions, posted a notice on its website notifying customers that the company has stopped taking new orders as demand had outpaced their ability to manufacture. 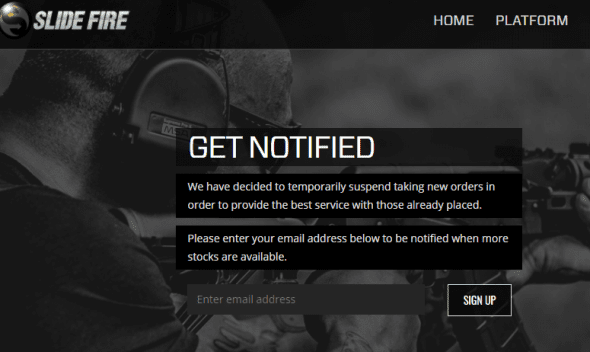 Usually, it’s the firearms themselves that see a sudden spike in demand after a shooting, but since the media and politicians are focusing on the stock, that’s where the market is going. When several online firearms accessory retailers were checked, they were also out of stock, or price gouging. Midway USA shows out-of-stock, no backorder, Cabela’s online site displays an error where the accessory used to be listed for about $119.

As normal retail channels emptied out, consumers headed to auction sites in a last-ditch effort to obtain bump fire stocks ahead of a proposed ban. Online firearms-related auction site GunBroker.com has several listings for Slide Fire stocks at bids of up to $1,025 as of the writing of this article. 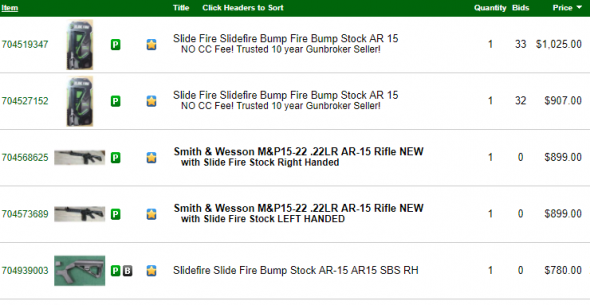 Senator Diane Feinstein (D-CA) along with 29 Democrats introduced legislation that would make it illegal to “import, sell, manufacture, transfer or possess” a bump fire stock which would not allow owners to keep the devices even if they had purchased them before the bill becomes law should it pass and be signed by the president.