Posted by: R. Mitchell in Featured News, In The News September 11, 2017 Comments Off on Irma 9 am Update – Tropical Storm – 5.1 million without power

The latest update on Hurricane Irma shows the storm striking continuing through northern Florida as a category one storm. More than 5.1 million are without power in Florida and Georgia.

This is the most up to date story on Irma but see all of our Irma coverage HERE.

The national weather service is currently forecasting landfall in western Florida. Irma is forecast to head due north and make pass very near Marco Island/Naples and make landfall at Sanibel Island/Ft. Meyers Beach before tracking up the peninsula into Georgia, Alabama, and Tennessee. 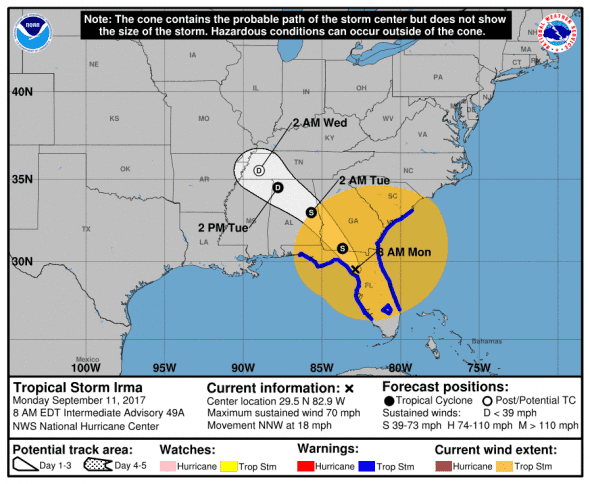 Rainfall: Irma is expected to produce the following rain accumulations through Wednesday:

TORNADOES: A few tornadoes are possible across northeast Florida and southeast portions of Georgia and South Carolina through tonight.

SURF: Swells generated by Irma are affecting the southeast coast of the United States. These swells are likely to cause life-threatening surf and rip current conditions. Please consult products from your local weather office.