Irma, already a strong category five hurricane, is likely to strike several eastern Caribbean islands in the next 8 to 24 hours and continue on a track very likely to heavily impact Florida this weekend as a major Hurricane. 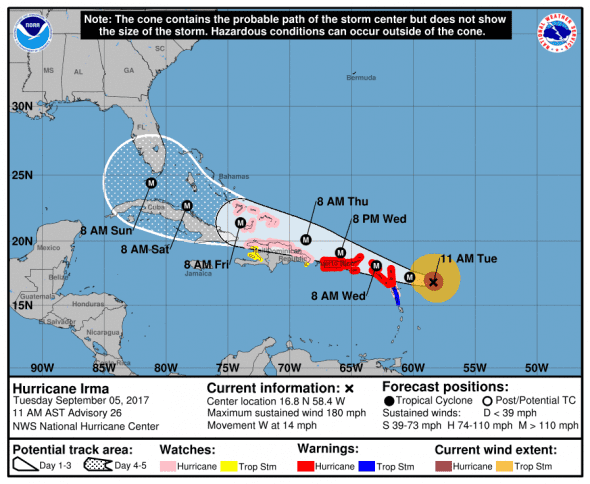 Latest satellite imagery shows the eye clouding over in what may be another eye wall replacement cycle which will slow strengthening until it completes.

Irma is a category five storm and is expected to maintain 180 mph winds over the next 12 hours before it begins a weakening trend as it heads towards the coast of Florida.

5-day weather models put Irma just south of or over southern Florida on Sunday. The models separate slightly after that, but consensus shows an increasing chance that Irma will directly impact Florida. The chance that Florida takes a direct south-to-north hit by a major hurricane is increasing by the hour. Models expect Irma to be a category 3 major hurricane as it nears the Florida coast.

If the storm takes the current model’s predicted course, straight up the middle of the Florida peninsula, damage could be catastrophic for the state. The storm could devastate communities from the Keys to the panhandle in a matter of just over 24 hours. Floridians should start preparing now to either shelter in-place or evacuate. Don’t wait until the last minute and please listen to local authorities for instructions.

STORM SURGE: The combination of a life-threatening storm surge and large breaking waves will raise water levels by as much as 7 to 11 feet above normal tide levels along the coasts of the extreme northern Leeward Islands within the hurricane warning area near and to the north of the center of Irma. Near the coast, the surge will be accompanied by large and destructive waves.

The combination of a life-threatening storm surge and the tide will cause normally dry areas near the coast to be flooded by rising waters moving inland from the shoreline. The water is expected to reach the following heights above ground if the peak surge occurs at the time of high tide…

Hurricane and tropical storm conditions are possible within the watch area in the Dominican Republic, Haiti, the Turks and Caicos, and the southeastern Bahamas by early Thursday.

SURF: Swells generated by Irma will affect the northern Leeward Islands, Puerto Rico, and the U.S. and British Virgin Islands during the next several days. These swells are likely to cause life-threatening surf and rip current conditions.

When to Expect Hurricane Irma

Support Conservative Daily News with a small donation via Paypal or credit card that will go towards supporting the news and commentary you've come to appreciate.
Tags
Florida Hurricanes Irma