Bill de Blasio is well known for his nanny-state, big government policies. How far does de Blasio think the government should go? According to this interview, fines for too much salt and bans on sodas over 16 ounces are apparently just the tip of the iceberg [emphasis mine].

What’s been hardest is the way our legal system is structured to favor private property. I think people all over this city, of every background, would like to have the city government be able to determine which building goes where, how high it will be, who gets to live in it, what the rent will be. I think there’s a socialistic impulse, which I hear every day, in every kind of community, that they would like things to be planned in accordance to their needs. And I would, too. Unfortunately, what stands in the way of that is hundreds of years of history that have elevated property rights and wealth to the point that that’s the reality that calls the tune on a lot of development….

Look, if I had my druthers, the city government would determine every single plot of land, how development would proceed. And there would be very stringent requirements around income levels and rents. That’s a world I’d love to see, and I think what we have, in this city at least, are people who would love to have the New Deal back, on one level. They’d love to have a very, very powerful government, including a federal government, involved in directly addressing their day-to-day reality.

Mr. de Blasio is a hero to the Left. Heck, they just re-elected the guy to a second term in New York City.

When Conservatives point at progressives and say “they’re communists” moderates and liberals roll their eyes, brush away the idea and move along. So how close to communism is Bill de Blasio’s rant to NY Magazine? Here’s an excerpt from The Manifest of the Communist Party that the Mayor’s thinking directly echoes [emphasis mine]:

In this sense, the theory of the Communists may be summed up in the single sentence: Abolition of private property.[1]

It should shock the conscience to hear such words from government leaders, but many don’t recognize the Marxist ideology in his words as their educational system has failed them and they’ve failed to recognize it. A recent Annenberg survey found that two-thirds of Americans can’t name the three branches of the U.S. government and only 35% could even name one – ugh…

Progressives have progressed. Step-by-step, decade-by-decade, one rule, regulation, and ordinance at-a-time, Communism has pushed its way into American government and society. And electing people like this is how it happened. 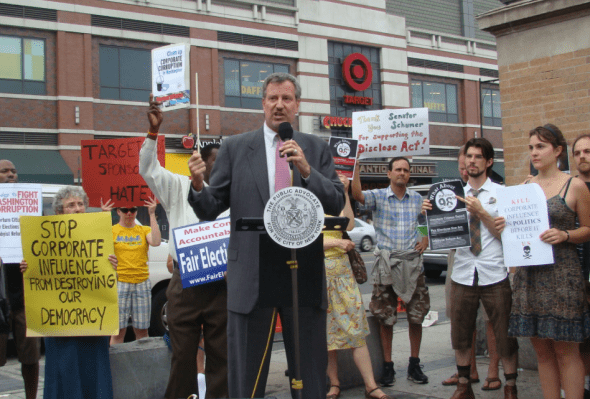