When the leftists at the Washington Post start offering relationship advice a Republican knows he could be on the cusp of something big. A recent WaPost headline warned, “Trump’s baffling attacks on McConnell could be costly to the president.” 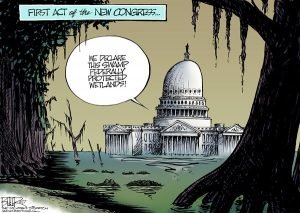 “Cost” here is mainly a function of how often Trump is hoping to eat in the Senate’s invitation–only dining room. Otherwise what’s “baffling” is how long it took the notoriously impatient Donald Trump to sound off.

Trump’s marriage of convenience with “legislative mastermind” Mitch McConnell — Curator of the Senate — has produced less than his relationship with Vladimir Putin.

After six months McConnell has failed to repeal Obamacare, failed to fund the wall, failed to reform the tax code, refused to return the Senate to pre–1970 filibuster rules and dismissed out of hand debating the one change that would do more to correct what’s wrong with Congress than any other: Term Limits.

The real risk to Trump and any hope he has for accomplishments in his first term is the status quo.

Something tells me the man who built Trump Tower didn’t win the presidency so he could be Mitch McConnell’s autopen.

Naturally, there is division over how to persuade Congress to support Trump. I’m sure the General Staff, or at least the generals, advocate doubling down on the “hearts and minds” strategy to win over recalcitrant Congressional leadership.

Just schedule a few more summits, golf games, White House lunches and Twitter tutorials. Soon Trump will be able to emulate the success our high command has produced in Iraq and Afghanistan.

And continuing this strategy will produce results very similar to Afghanistan. McConnell will continue to be passive–aggressive and the Taliban aggressive–aggressive. Mitch, author of the unread tome “The Long Game,” and the Taliban both plan to outwait their opponents. Their intention is to be around after Trump and the Army are long gone.

The alternative to the appeaser’s long, slow defeat strategy is letting Trump be Trump.

The outsider who said during his inauguration, “For too long, a small group in our nation’s capital has reaped the rewards of government while the people have borne the cost.” The outsider who promised to drain the swamp, not stock the White House with reptiles.

The principle obstacle here is Trump. He is our first ADHD president. Moving an inert mass like McConnell’s Senate requires persistence and focus. So far Trump lacks both.

On August 10th Trump lurches back into drive and says McConnell should resign from Senate leadership.

On August 15th Trump repeats his strange endorsement of Strange.

A tortoise like McConnell is immune to whiplash from this back–and–forth, but it only serves to reinforce what the WaPost says, “For some time, it has been apparent that members of Congress do not fear the president.”

That must change. Trump needs to play his “long game” and make opponents pay a price. Trump is holding a rally in Arizona next week, the home of craven media hound Jeff Flake who is conveniently up for re–election in 2018.

That’s the perfect time for Trump to announce he’s personally donating $50 million to the Make America Great Again PAC that will be supporting primary opponents of senators who are blocking the platform on which he won the presidency.

He can consider adding Utah’s Orrin Hatch and Tennessee’s Bob Corker to the list. It’s important that Trump doesn’t make the effort based on these lizard’s opposition to him personally, but rather their opposition to making America great again.

The primary opponents Trump supports don’t even have to win. They just have to make targeted incumbent’s life a living hell and an example of the consequences resulting from betraying the base.

The Strange endorsement proves Trump’s White House political operation is either second–rate or angling for jobs with the establishment GOP after Trump leaves.

Trump is also notoriously cheap, as his reneging on his pledge to fund his own campaign proved, so funding a PAC to support primary challengers is unlikely.

Finally, Trump has the attention span of a short circuit.

I’m afraid instead of reforming a political system run solely for the benefit of the elites; Trump will wind up being George Bush with an angry Twitter account forced to accept whatever crumbs and statist legislation McConnell and Speaker Paul Rino, excuse me, Ryan send him.