The jobs that were supposed to be safe from artificial intelligence are looking a lot less safe. The creative fields of storytelling, moviemaking and now music composition are being invaded by Skynet’s predecessor.

Creativity was the last bastion of hope for human work. Jobs that required our innate ability to effectuate novel ideas were supposed to remain ours. Now, AI is learning to create.

I first heard about this when a reader sent me a link to Taryn Southern’s new release on YouTube titled “Break Free.” It’s not my style, but easily something I’d expect my 12-year-old daughter to be listening to on the radio or Spotify.

I was more intrigued by the description:

All music and video art made with artificial intelligence, lyrics by Taryn. Give a thumb up if you like the video, and please leave feedback in the comments. See below for links to the music and information on the video and AI collaboration.

While the lyrics and vocals are all Taryn, the instrumental score was written by a computer. I don’t think it’ll win any awards, but it sounds radio-worthy to me. Heck, I’ve seen all sorts of crazy crap get awards and, who knows, maybe MTV will add an AI category to their now non-gendered awards. Or would AI just compete in the non-gender .. ah who cares?

Next, I decided to hop over to Amper and see just what this thing is all about. I play several instruments and write music that many enjoy – ok, at least my dog and I enjoy.

I didn’t want to spend a ton of time composing a masterpiece, but what came out took very little knowledge of music.

The app provides a wider inventory of instruments than I would have expected, but the genre and modal choices are lacking. Your composition can include “Cinematic”, “Folk”, “Classic Rock”, or “Folk”. And the only scale modes available or Dorian and Minor. No Major scales although I did notice the computer choosing to run minor keys in their major modes. At one point, I had chosen A minor for a region and it chose to play the region in the relative key of C Major. Same scale, different tonic, but it appeared the AI had a creative difference of opinion with me. I asked it to recreate the section and got the desired A minor feel. Human 1,  Skynet 0 – for now. Nothing personal Mr or Mrs. AI.

Within each Genre are “moods” like “epic driving”, “happy”, “reflective”, “playful” and more. The user also has control over tempo and key.

With a small number of inputs, it takes little effort to have something incredibly useful pop out. I decided to create a quick 75-second background track that might be useful for a video. Here’s the video with the music that Amper created.

I did run into issues when I tried to add regions and vary the length of them. Often, after a 45-second  to 2-minute delay, I would get an error message about the length or tempo of my piece and have to try random things to correct the issue. It is a beta so this kind of thing is to be expected.

Later in the run, I would do something as simple as changing the key and it would show this same error. I didn’t change the length or tempo of the region. Perhaps the AI just didn’t like my key change and decided to even the whole human/Skynet score thing… 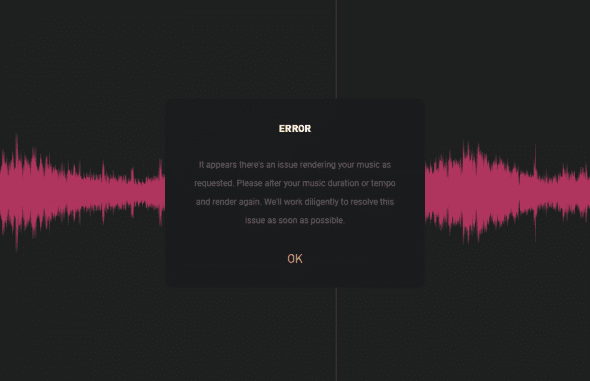 There were also a few panic moments when my saved creations, or rather SkyNet’s and my co-creations, disappeared. I’d click on the creation and an empty timeline would appear. Then, minutes later, the timeline would magically start filling in. It appears to be an issue with slow loading rather than data loss.

The app is a bit temperamental, and I hope it doesn’t take that personally, but it shows promise – as long as promise means that tons of musical score composers and pop music songwriters are about to be out of work. Some of them deservedly so.

Support Conservative Daily News with a small donation via Paypal or credit card that will go towards supporting the news and commentary you've come to appreciate.
Tags
Amper Artificial Intelligence Music