Harris County Flood Control officials announced new evacuations for the Houston area as water has reached the emergency spillway at one dam creating an uncontrolled release into residential areas.

Officials said Monday night that water levels at the Barker and Addicks dams were less than 5 feet from reaching their emergency spillways which would allow an uncontrolled release into residential areas of west and southwest Houston, Buffalo Bayou and downtown Houston. 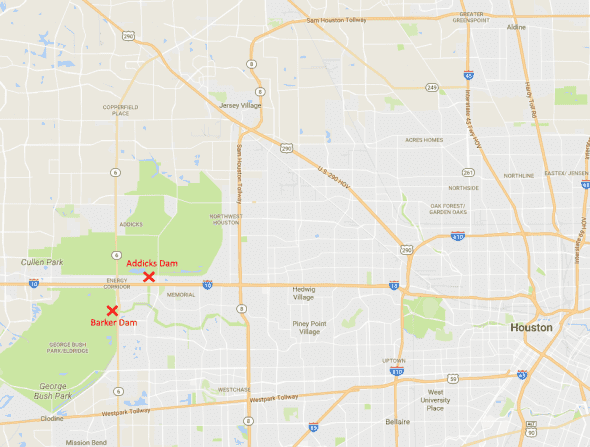 At 7 am Tuesday, sensors at Addicks Dam reported that water had begun spilling over and Barker is expected to go into overflow operations Saturday.

Addick’s overflow started as a trickle. Water was just 1″ deep over the top as of 7:55 am CDT but the depth has since steadily increased to .48 feet indicating increasing flow. Barker’s sensor housing began flooding Tuesday morning so accurate readings were not available. 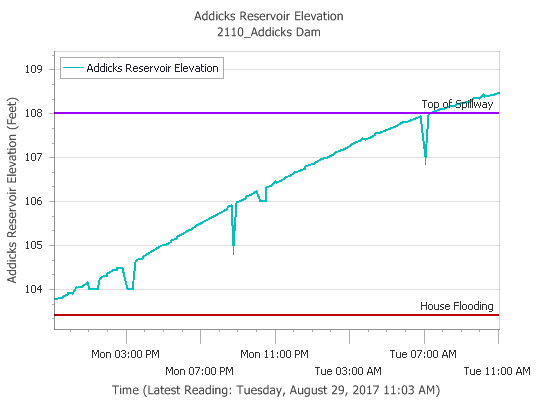 "This will make the Buffalo Bayou flooding worse." pic.twitter.com/AIV2dMT9vj

Addicks has never overflowed before and officials aren’t sure how water will move through West and South Houston as the spillover continues. Just yesterday, the Army Corps of Engineers didn’t think a spillover would occur and evacuations were not issued at that time. The situation is not expected to improve anytime soon as runoff from current showers is still draining into the Addicks and Barker reservoirs and rain is expected in the Houston area through Thursday.

Bear Creek and Canyon gates neighborhoods were the first affected on Monday when both Barker and Addicks dams began a controlled release in hopes to avoid today’s spillovers, but the reservoirs filled faster than they could be drained.

In a Monday evening press conference, officials said that the pool elevation at Addicks had risen nearly two feet in three hours, up to 105 feet as of 5 p.m. A similar increase was reported at Barker which is currently at 99.9 feet, up from 97.9 feet at 2 p.m.

During heavy flooding in 2009, Addicks Dam showed signs of irreversible failure after which the Army Corps of Engineers labeled it an “extremely high risk of catastrophic failure.” Temporary repairs were made in 2012 and as recently as September the Corps stated that there was no imminent risk of failure. Permanent repairs were started in 2016 and expected to take three years to complete.

Failure would increase flooding in West Houston and make flooding along the Buffalo Bayou much worse.

In remarking on Tropical Storm Harvey, officials said, “This event has the potential to exceed a 1,000-year flood threshold.”

Support Conservative Daily News with a small donation via Paypal or credit card that will go towards supporting the news and commentary you've come to appreciate.
Tags
flooding Houston Hurricane Harvey Texas