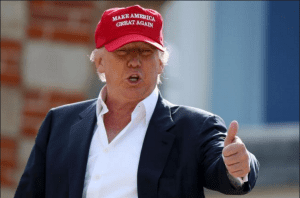 Reporters were briefed Sunday morning on the administration’s upcoming “Made in America” week, the latest policy-themed week organized by the White House.

“The week ahead is going to be a great opportunity to highlight and to celebrate American workers and American companies that are responsible for producing the goods marked Made in America that are a gold standard throughout the world,” a White House official said.

White House spokeswoman Helen Aguirre Ferre told reporters that there will be a “made in America product showcase,” on Monday in which American-made products from all 50 states will be brought to the White House.

Then, on Wednesday, President Donald Trump will issue a proclamation on the importance of making products in America.

The president will go to Newport News, Va., on Saturday for the commissioning of the USS Gerald R. Ford.

The White House has not released further details on the latter two themes.

The highlight series is intended to get more attention on President Trump’s agenda which has been buried under a deluge of news stories on a meeting between Donald Trump, Jr. and Natalia Veselnitskaya. The press has framed the meeting as proof of collusion between the Trump campaign and the Russian government even though Veselnitskaya admits to having no valuable information to offer.