It should come as no surprise that the crybaby left is planning another one of their ridiculous protests next Friday.

This time, it will be a huge rally that will be attacking the First and Second Amendment as they currently exist and will attract the same collection of misfits, Democratic party operatives and paid tantrum-throwers funded through mysterious front groups tied to blood-sucking Hungarian ghoul George Soros.

The protest will reportedly be organized by the same folks behind the post-inauguration “women’s march” where tens of thousands of spontaneous demonstrators just happened to be wearing the same pink pussy caps and they thrilled to eloquent speeches by the likes of foul-mouthed celebrities Madonna and Ashley Judd.

But what this really appears to be – in addition to another anti-Trump public snit – is a pressure campaign against the National Rifle Association.

The NRA is a formidable source of support for GOP candidates and the Democrats will send their brainless meat puppets into Fairfax, Virginia on Friday, July 14th.

Fairfax is where the NRA is headquartered. 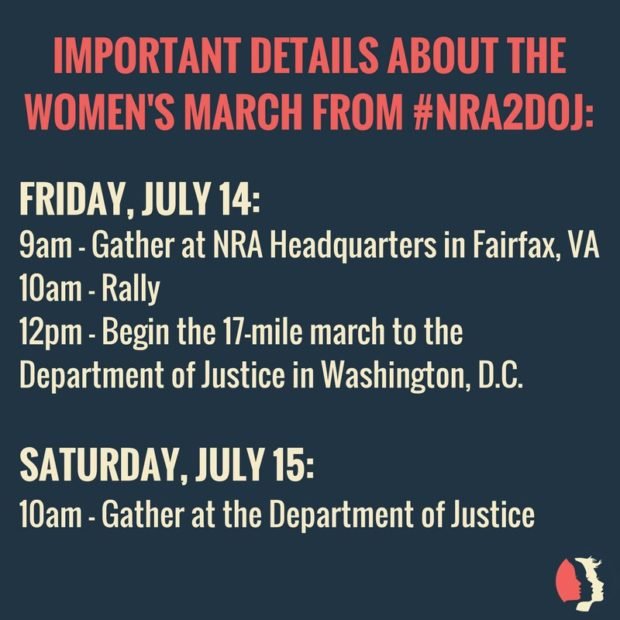 The organization recently ran a hard-hitting ad warning of the rising danger of the extreme left and its fondness for violence.

The Hill reports on this wretched refusal to accept the results of a legitimate election AND the liberal’s anti-gun zealotry in the article “Women’s March plans anti-NRA protest”:

The organizers of the massive Women’s March that took over Washington, D.C., the day after President Trump’s inauguration are planning a new protest this month against the National Rifle Association (NRA).

The protest will be held July 14 in Fairfax, Va., according to the Huffington Post.

On the Facebook page for the event, the organizers say: “We know that we are not safe. But we will not be intimidated into silence.”

“Recent actions of the NRA demonstrate not only a disregard for the lives of black and brown people in America, but appear to be a direct endorsement of violence against women, our families and our communities for exercising our constitutional right to protest,” the Facebook event says.

The protest comes after the NRA last month released an ad that attacked the media, Hollywood and other institutions in the U.S. that conservatives say are liberal-leaning.

“They use their media to assassinate real news. They use schools to teach children that their president is another Hitler. They use their movie stars, singers, and comedy shows and award shows to repeat their narrative over and over again,” Dana Loesch, a spokeswoman for the NRA, says in the ad.

“And then they use their ex-president to endorse the resistance, all to make them march, to make them protest, make them scream ‘racism’ and ‘sexism’ and ‘xenophobia’ and ‘homophobia.’”

It’s a hell of an effective ad too, check it out for yourself:

No wonder why Soros is scrambling his minions.

It has yet to be announced whether pro-Second Amendment Americans and NRA members will be staging a counter-protest.

Support Conservative Daily News with a small donation via Paypal or credit card that will go towards supporting the news and commentary you've come to appreciate.
Tags
Radical Left The NRA The Second Amendment