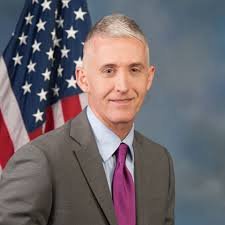 Representative Trey Gowdy (R-SC) got some big career news Thursday, June 8th when he was selected to become the next Chairman of the Committee on Oversight and Government Reform. Gowdy was picked to replaced Utah Representative Jason Chaffetz who’s set to officially resign later this month.

Rep. Gowdy is known for his work as Chairman of the Select Committee on Benghazi and will now chair one of the most powerful and high-profile Committees in Congress.

“I am grateful to the Steering Committee and the Conference as a whole for this opportunity to serve,” Gowdy said in a statement. “I look forward to working alongside the other Committee members, as well as any member of Congress, as we discharge the jurisdiction assigned to us.”

Rep. Gowdy’s promotion didn’t come without harsh criticism from those on the left. MSNBC published an article titled  “Despite last year’s embarrassing missteps, Gowdy gets a promotion.”

The article went onto to attack Gowdy for his performance as Chairman of the Benghazi committee.

Representatives Gowdy’s promotion is being viewed as a huge win for conservatives. Many believe he has the experience and determination needed to make Congress act as the check against the other two branches that it has failed to be for decades.

Support Conservative Daily News with a small donation via Paypal or credit card that will go towards supporting the news and commentary you've come to appreciate.
Tags
Politics Trey Gowdy