Apple CEO Tim Cook has announced that the company is going to focus on developing self–driving car “systems” instead of the car itself.

In an interview with Bloomberg Television, he explained this qualifies as a “MOA” effort as in “The Mother Of All AI” projects. 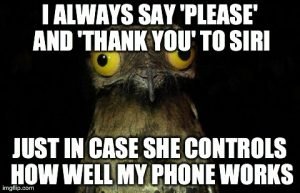 The decision to concentrate on software, rather than both hardware and software is a  for Apple. Normally the company designs the hardware along with the operating software and then ships the entire package off to China for manufacturing and intellectual property theft.

When the finished product returns to the US, Apple does its best to control the sales of all related products.

I’ve been with Apple longer than I’ve been with my wife. This is a fitting comparison since buying Apple is the hardware equivalent of matrimony. And even more fitting personally since I’ve had excellent luck with refurbs, regardless of whether it’s Apple computers or wives.

Apple, like my wife, is a closed system that takes a dim view of playing the field. Cupertino prefers customers make all software purchases through the App Store. The same goes for hardware and the Apple Store.

Android, on the other hand, is a wild and wooly open system with many hardware manufacturers, many software producers and little if any standardization. Apple’s closed system is designed with control in mind.

Under Apple there is much more look–and–feel uniformity across the product spectrum, which comes with a price. Usually higher.

So, I would have had mixed feelings about owning an iCar.

I wouldn’t have liked being limited to buying gas at Apple stations. Sure the free operating software updates are nice, but that’s balanced with the thought of being lectured on the size of my carbon footprint by an Apple “Genius.”

Cook, at the time, hadn’t ruled out electric vehicles. He rhapsodized, “It’s a marvelous experience not to stop at the filling station or the gas station.” This only proves the chauffeur maintains the car without Cook’s help.

Gassing up takes about five minutes. Charging up takes hours. Electricity may start cheap, but at the rate that Apple changes the design of its propriety connectors, the cost of new adapters to plug into the power outlet will no doubt balance out the iFuel cost.

I think for the foreseeable future I’ll keep my manual car. If I want to drive with a woman that argues about routes and how fast I drive, I’ll just invite the wife.

CORRECTION: I was wrong last week. That column concerned NFL Commissioner Roger Goodell’s decree allowing NFL players scoring touchdowns to make fools of themselves — while the blockers that made it possible are ignored.

That may have been attractive for ballerina ball fans accustomed to method acting from their players, but football should be a serious game.

If I wanted to watch bad dancing and mini–charades I’d attend a GOP town hall meeting when Obamacare repeal was on the agenda. When I watch the NFL, I’m hoping professional football players will act professionally.

You may recall my temporary burst of optimism when Cameron DaSilva of Fox Sports reminded us next season the NFL will also institute a snap clock. It starts when an official signals touchdown and teams will have 40 seconds to get set and begin the conversion.

DaSilva reported there were 32 touchdowns that weren’t followed by a booth review, penalty or injury. Even without the Original Tap–Dancing Kid performing his routine, teams were taking an average of 45 seconds to snap the ball. Adding choreography would only make the situation worse.

My optimism crashed when I mistakenly calculated those 32 touchdowns were thinly spread over the 119 games in the season’s last seven weeks and playoffs. At that rate, only one-quarter of a TD per game would be influenced by the snap clock.

But I was wrong!

I should have known something was off. Reviewing 119 games, even with fast–forward or NFL Red Zone is a significant investment in a research project for a reporter facing multiple deadlines. That kind of time commitment spent watching streaming video is more characteristic of the government; say the US Patent and Trademark Office.

While a seven game schedule cuts the sample size and increases the margin of error, the results will do in a pinch. (If you know someone in the USPTO who is not under investigation by the Inspector General, maybe you could ask them to examine the other 112 games.) For me, 4.5 touchdowns per game, unsullied by freestyle ego–mania, is much better than what I feared.

Support Conservative Daily News with a small donation via Paypal or credit card that will go towards supporting the news and commentary you've come to appreciate.
Tags
Apple self-driving cars Technology The NFL Tim Cook