In another ugly development that shows that the political situation in the nation has been irreparably damaged, someone has sent threatening letters containing white powder and a profanity laced screed to neighbors of one of the candidates in Georgia’s 6th Congressional District.

The district is ground zero of a high-stakes special election that the Democrats and their money people have poured over $23 million into out of the hope that they can get that signature win that will start the media narrative that the country has turned against President Trump.

Despite the fundraising advantage, the Democrat candidate Jon Ossoff has struggled to impress voters or make inroads in the polls.

According to a new poll, Ossoff has dropped seven points in a week against Republican opponent Karen Handel and is now tied.

Apparently, Ossoff’s lackluster campaign, as well as his inexperience combined with the stakes, have driven someone to resort to what could be construed as an act of domestic terrorism.

On Thursday afternoon, authorities were dispatched to the Republican Handel’s neighborhood after menacing letters filled with mysterious white powder were discovered.

Suspicious letters sent to Fox 5, Karen Handel and her neighbors. Inside each is a powdery substance and "threatening" language #11alive pic.twitter.com/2Hx47OQMia

According to Roswell Police spokesperson Lisa Holland, police received a call around 1:30 p.m. that a person had gotten an envelope in a mailbox that contained an unidentified powdery substance in the County Club of Roswell.

Police confirmed that they are now investigating a total of five calls of other homes that have also received powdery substances. At this time, they don’t know if there are any more out there that have been delivered. The U.S. Postal truck that was involved has been notified.

The FBI confirmed that they are also investigating the situation.

Handel, who is running for the Georgia 6th District Congressional seat, confirmed that she also got an envelop at her home and released a statement on the situation saying, “This afternoon we had some suspicious packages delivered to our house and to our neighbors. The packages contained threatening letters and a suspicious substance. The police were quickly notified and street is now being blocked off. We will continue to coordinate with law enforcement as necessary.”

Shortly after police responded to the Roswell neighborhood, the FBI confirmed they were also looking into another possibly related suspicious package received on Briarcliff Road at WAGA-TV, the Atlanta Fox News affiliate.

Via the Washington Free Beacon – a copy of a letter said to be posted to Facebook (warning:graphic language): 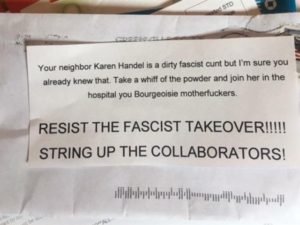 The letters arrived at a time of increasing leftist violence and threats to Republicans, Trump supporters and the president himself. If the threats are traced back to the radical left it will be a sign to authorities that they have sat on their hands for too long while a dangerous, anti-American cancer has been spreading across the land.

The runoff for the special election will take place on Tuesday.