Adam West who played the caped crusader in the cheesy 1960’s Batman series has passed away at the age of 88.

For those who were growing up during the original run of the series, West was a cultural icon for his role as Batman before the character took an increasingly dark turn in future incarnations.

The series ran on ABC for 120 episodes from 1966-1968 when West and Robin the boy wonder (played by Burt Ward) thrilled viewers with a half-hour battle against arch-criminals the likes of the Joker, the Penguin, the Riddler and the Catwoman.

A hallmark of the series was that many episodes ended in cliffhanger fashion with our heroes in peril with seemingly no way out. But in the style of the great movie serials of yore, the dynamic duo always escaped and thwarted the villains.

There were also the retro onscreen graphics of POW!, ZAP!, or BOOM! whenever a bad guy got socked by Batman or Robin. They would eventually be joined by Batgirl (Yvonne Craig) for the final season.

West and Ward also appeared in a feature length movie as Batman and Robin. 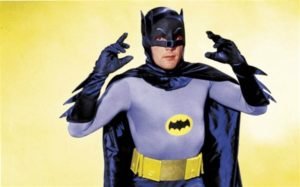 The series was based on the hit D.C. Comics character that dated all the way back to 1939 and it’s not an exaggeration to say that Batman has become one of the most well known characters in modern American culture.

Following the end of Batman the TV series the character didn’t show up again onscreen in a big way until director Tim Burton’s quirky movies starring Michael Keaton. The first film, 1989’s Batman raked in over $400 million at the box office and featured a drop-dead performance by Jack Nicholson as the Joker.

The sequel – Batman Returns – came out in 1992 and while grossing $266 million was slammed by some for being too dark and violent due to Danny DeVito’s tour de force portrayal as the Penguin.

The franchise then went into the tank when Val Kilmer and George Clooney took their respective turns as the masters of the bat cave. The putrid 1997 Batman & Robin was thought to have killed off the series forever.

Then director Christopher Nolan masterfully resurrected the character in an updated version that fit the darker times of the post 9/11 world.

Christian Bale took over behind the cowl in the outstanding 2005 origin film Batman Begins. That was followed up in 2008 by the pitch black The Dark Knight in which gifted young actor Heath Ledger gave the performance of his life as the Joker.

This time around the evil green-haired clown was much less a criminal than a full-blown anarchist. Ledger would later die of an overdose, some have speculated – although it has never been definitively proven – that the psychotic nature of the character may have caused him personal issues.

The trilogy wrapped up with 2012’s The Dark Knight Rises which will always be remembered less for the movie than the murderous rampage that a Denver area psychopath embarked upon when he attended showed up at a midnight debut and opened fire on the audience with an arsenal of weapons.

With superhero movies now being big money makers at the box office, the character has once again returned in last year’s Batman vs. Superman: Dawn of Justice and the upcoming Justice League movie.

Following his role as Batman, Mr. West defied the typecasting that many stars of the classic 1960’s TV series’ have been plagued by. He went on to have a long and successful career in films and television.

If there was something to be remembered about the 1960’s Batman series it was from a far less complex and dangerous era even if the decade would eventually become one of the most bloody and tumultuous in modern American history.

Our beloved AW passed away last night. He was the greatest. We'll miss him like crazy. We know you'll miss him too – West Family pic.twitter.com/8bkEq1C2ao

Adam West was always a class act and may he rest in peace.