The saga of former United Airlines customer Dr. David Dao is getting more and more expensive for the airline. According to the Daily Mail, he didn’t get home with all his teeth or his baggage. It seems that although United’s O’Hare Airport staff had time to order Dao beaten, which caused the loss of two teeth, they didn’t have time to take his luggage off the plane before it departed.

Maybe the baggage compartment isn’t subject to being oversold. 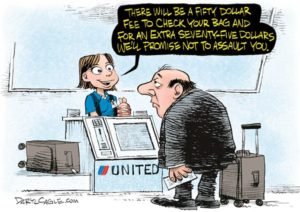 After the incident United CEO Oscar Munoz evidently decided to emulate Jim Carrey in the movie “Liar, Liar” and kick his own a**. He issued a number of news releases and endured a series of interviews that only served to illustrate the truth of the old public relations adage: When you’re in a hole, stop digging.

First Munoz contended the 69–year–old doctor was “belligerent.” Then Bloomberg reports that Munoz said no United employees would lose their job or be punished in the wake of the incident. “It was a system failure across various areas, so there was never a consideration for firing an employee or anyone around it,” he explained.

Although accurate, the statement doesn’t begin to address all of United’s legal problems. Dao was bumped because of what was termed at the time an “oversold” condition. The contract United customers enter into and never read when they buy a ticket addresses “denied boarding” on an oversold flight. United’s enormous liability problem is Dao wasn’t denied boarding; he was boarded and seated on the aircraft, so the contract provisions no longer applied.

After the initial death–by–streaming the video caused, United clarified the situation. Their particularly aggressive brand of musical chairs wasn’t caused by overbooking. United needed to move a crew of four to Louisville for a flight the next day and Dao was in the fourth seat.

Now there are many examples of passengers being beaten during their commute. An entire train was hijacked in Oakland just this week. But Dao may be the first person in history who was beaten so someone else could commute.

What many people don’t know about the airline business is many, if not most, of their cabin crews don’t live near the airports where they’re assigned. Crews flying out of Louisville may choose to live in a happenin’ city like Chicago, since the airborne commute is free. Dao’s teeth–rattling adventure could well have been the result of a lifestyle choice by the cabin crew in question. A tidbit that will cost even more if the case goes to trial.

The airline’s “system failure” was a pennywise–and–pound–foolish approach to overbooking. United supports the free market when it helps to make money, but dislikes the market when it costs money.

United began the market–based bidding process by offering $400 to passengers, but there were no takers. Then United offered $800. When that didn’t work the bidding was abruptly closed.

The supervisor hadn’t even gone up to the $1,350 maximum compensation required by law when he awarded Dao a free trip to Fist City.

And this is where the doctor’s loss becomes our gain.

Delta Airlines saw the post–knockout $1.4 billion drop in United’s stock price and decided to expand its auction for oversold seats. The Daily Caller reports Delta gate agents can now offer up to $2,000 in compensation and ground supervisors can go up to $9,950.

I’m a very satisfied Premier 1K flyer with United and today I received an email acknowledgement from Munoz that admits, “Our procedures got in the way of our employees doing what they know is right.”

To show Dr. Dao didn’t bleed in vain, in the future United “will increase incentives for voluntary rebooking up to $10,000.” Now the only violence in the cabin during an overbooked event will be when passengers didn’t think a volunteer held out for enough money and reduced compensation for the rest of the volunteers.

Even better, United now has a “no–questions–asked” $1,500 reimbursement policy for misplaced baggage. So if Dr. Dao’s new dentures are lost during a future flight he won’t have to supply the baggage supervisor with a cast of his teeth.

This is the most customer–oriented policy change that I can remember in the airline industry and we owe it all to Dr. Dao. I would almost suggest we start a GoFundMe campaign to raise money for the good doctor’s physical therapy and PTSD sessions to demonstrate our gratitude.

But something tells me that after either the settlement talks or the trial concludes, Dr. Dao will have so much money he won’t be participating in any seat auctions regardless of how high the bidding goes.