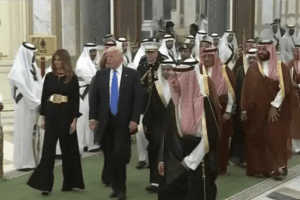 Trump’s first trip to the Middle East has proven to be a true sensation. The ‘drive by’ media is beside themselves with their knickers in a twist. “How can this be?” they are saying after portraying him as a stumbling, misguided, boob domestically and now the world loves him.

Saudi Arabia greeted him with a reception like no other president has received – not both Bushes, not the Clintons and not Obama. Gorgeous Ivanka and Melania Trump were praised by the Arab press as: ‘Classy, conservative and elegant.’ Despite the mainstream media narrative that President Trump has alienated Muslim allies with his tough stance on Islamic terrorism, he was treated like a king in Riyadh, where photos of Trump and the American flag were prominently displayed.

The Ritz-Carlton Hotel projected a stunning five-story portrait of Trump on the side of its building. The King gave Trump their nation’s highest civilian award that I understand Obama is jealous of now because he felt he should have gotten it. The Saudi’s had a great fear of Iran and Trump stood by them and said they should not let Iran or Islamic extremists interfere with their places of worship or their daily lives and they are to be wiped off the face of the earth.

The radical ‘hate Trump’ media always picks on the slightest thing Trump does. Talking heads complained he didn’t use the words “Radical Islamic Terrorism” in his speech. But he did use “Islamic extremism” which is virtually the same thing.

During his visit there President Trump signed a multi-billion-dollar arms and economic deal with Saudi Arabia Saturday in a move intended to strengthen the U.S.-Saudi Arabian alliance against ISIS on the president’s first foreign trip. The agreement is worth $110 billion effective immediately and $350 billion over 10 years, in an effort to equip Saudi Arabia and Persian Gulf partners in the fight against ISIS. The agreement will provide fighter jets, tanks, combat ships and anti-missile defense systems and create defense-sector jobs in the U.S., according to the White House. The deal includes additional private-sector agreements and a joint vision statement with Saudi Arabia, one of the world’s largest oil producers.

I just hope this doesn’t backfire on us since Saudi Arabia has been known to be a state sponsor of terrorism and the 9/11 hijackers were all from there.

President Donald Trump used his platform while visiting Saudi Arabia to make it clear that Muslim-majority countries have an obligation to fight against Islamic extremism too.

But, he added, the countries could not wait for “American power” to act, and had to “fulfill their part of the burden.”

Behind the lavish praise heaped on his hosts, President Trump used this speech to deliver a tough message to Arab and Muslim governments: deal with the ideology that fuels terrorism now or live with it for generations to come.

He went out of his way to avoid the sort of inflammatory language he’s more usually known for. His repeated condemnation of Saudi Arabia’s regional rival Iran will have pleased the Gulf Arab leaders listening.
Unlike his predecessor, Barack Obama, this US president made no mention of human rights or democracy. But he did condemn the oppression of women. BREAKING: Trump STUNS The Muslim World With 8 Words [VIDEO]

Saudi Arabia and the United Arab Emirates have pledged a combined $100 million to the World Bank’s Women Entrepreneurs Fund, a campaign that is the brainchild of Ivanka Trump.

The pledge comes during President Trump’s first foreign trip, signaling the president’s eldest daughter may have been instrumental in securing this significant contribution.

The World Bank announced the donation at an event on Sunday, the Wall Street Journal reports. The goal of the Ivanka-inspired fund is to help female entrepreneurs start their own businesses. The fund is aimed at women in the Middle East to start their own business. Naturally  the destroy Trump media is trying to compare it to the Clinton foundation which it is not. it is not a pay for play money laundering scheme like the Clinton Foundation was and none of the money is going to the Trumps like it did with the Clintons. The fund itself is new. We first heard about it from the presidential assistant during the Women 20 summit in Berlin, when Ivanka Trump called for a worldwide investment in women. Saudi Arabia, UAE pledge $100 million to Ivanka Trump-backed women’s fund – AO

In Isreal Trump was given another rousing welcome. Prime Minister Benjamin Netanyahu and the Israeli people were absolutely giddy to see the new US president land in Tel Aviv after eight dark years under Obama.

After President Trump and Benjamin Netanyahu exchanged greetings Sara Netanyahu took Melania Trump aside and gave her a pep talk on the tarmac.

Sara Netanyahu:  “I talk every place about her, how great she is. And how great you are. I can testify to that. Because a majority of the people in Israel, unlike the media, they love us. So we tell them how you are great so they love you. We have very much in common. We’ll talk about it over dinner.” AWESOME! Israeli First Lady Gives Melania Trump a Pep Talk on Tarmac: “Like Yo

Mrs. Netanyahu is right, the MSM has become the enemy of the people. They are the driving force behind the constant assault on Trump. It’s one fake story after another all designed to bring down the POTUS. No integrity or honesty or even common decency, just blind hatred for our President. Dishonest, lying and extremely biased “journalists” are literally trying to replace the electorate and decide who our president is. They are so attached to Obama that they are determined to preserve his legacy. That’s what all this attack on Trump is about. I applaud President Trump and the First Lady for having the backbone & patriotism to stand up to these horrendous, fake, and illegitimate attacks on them by the Media, DNC and GOP.

PalmettoTree • 5 hours agoSo glad there is class back in the US White House again. I’m proud to stand w/ Israel- and ashamed of the past 8 years that we has a president who favored the Muslim Brotherhood-and tried to defeat Bebe. Thank God we have Trump. And hopefully the Seth Rich case will lead to jail for Hillary and Obama.

Melania and Ivanka Trump focus on new freedoms for women in

Support Conservative Daily News with a small donation via Paypal or credit card that will go towards supporting the news and commentary you've come to appreciate.
Tags
Israel saudi arabia