The viral video of a passenger being dragged off a United Airlines plane was the second embarrassing public relations nightmare in a month for United Airlines, but hey … these things come in threes, right?

(if VIDEO below does not play, click HERE for non-amp version)

After having refused to allow two girls to board a UAL flight last month, a video went viral Monday showing a man violently being removed from a United Airlines (UAL) flight after he refused to “voluntarily” give up his seat for airline employees, UAL’s CEO then penned a public response saying, oddly, that he was sorry for the manner in which the passengers were accommodated – yeah, seriously??

If his public communication wasn’t bad enough, an internal email to employees from the airline’s chief executive Oscar Munoz has been leaked and, yeah, it’s even worse than the public release [emphasis mine].

Like you, I was upset to see and hear about what happened last night aboard United Express Flight 3411 headed from Chicago to Louisville.

While the facts and circumstances are still evolving, especially with respect to why this customer defied Chicago Aviation Security Officers the way he did, to give you a clearer picture of what transpired, I’ve included below a recap from the preliminary reports filed by our employees.

As you will read, this situation was unfortunately compounded when one of the passengers we politely asked to deplane refused and it became necessary to contact Chicago Aviation Security Officers to help.

Our employees followed established procedures for dealing with situations like this. While I deeply regret this situation arose, I also emphatically stand behind all of you, and I want to commend you for continuing to go above and beyond to ensure we fly right.

I do, however, believe there are lessons we can learn from this experience, and we are taking a close look at the circumstances surrounding this incident. Treating our customers and each other with respect and dignity is at the core of who we are, and we must always remember this no matter how challenging the situation.

Basically, the whole thing happened because the customer defied their polite requests for him off to get off a flight he had paid for and been seated upon and then refused to be involuntarily deplaned by overly-aggressive security personnel that left him repeatedly muttering “just kill me” and looking like this:

NO, Mr. Munoz, that’s not what went wrong.

The passengers were being pushed off this particular flight because UAL crew members needed to get to Kentucky in time to avoid having a flight there get canceled. That would be a severe financial issue for the airline and an incredible inconvenience for the passengers who were booked on that flight. Both are significant reasons for UAL to want that crew on board that flight.

Did they only discover this need after all the passengers were boarded?

Reports are that the airline only offered $800 in an attempt to get passengers to voluntarily leave the flight. After no one took the offer, they selected four people to involuntarily deplane.

To avoid this kind of public relations fiasco, the offer should have increased until someone decided it was financially rewarding enough to compensate them for the inconvenience of being put on a flight the next day. How much would it have been worth for the airline to avoid this nightmare? Certainly $1,200 to $2,500 plus overnight hotel, meals, and rides to and from the airport would have been much less costly.

Airline regulations also require the airline to pay 400% of the original ticket price, up to $1,375.00 for involuntarily deplaning these passengers. It would seem that the financial calculations ended at this penalty as the ticket price was likely around $200 per seat. Surely, the Airlines understand that the costs are greater than just the imposed penalty?? Not according to the CEO’s email.

Reaccomodation of overbooked passengers happens tens of thousands of times per year. Weather, mechanical issues, a flight crew member calling in sick, and many other unforeseeable issues might cause the airline to have to adjust crew locations quickly, but this is an excellent example of how not to handle it.

The regulatory penalty was apparently not high enough to cause airlines to correct their behavior, but perhaps market forces will have them redoing the math on incentives for passenger compensation when a flight is overbooked. The market corrects such things far better than the government ever could.

How is “the market” responding? 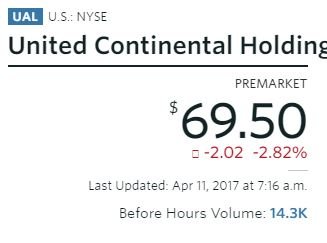 His crime: Buying a seat @United wanted to take back for an employee.

Here’s the moment he goes unconscious and is dragged down the aisle:

@United overbook #flight3411 and decided to force random passengers off the plane. Here's how they did it: pic.twitter.com/QfefM8X2cW

Support Conservative Daily News with a small donation via Paypal or credit card that will go towards supporting the news and commentary you've come to appreciate.
Tags
Oscar Munoz United Airlines