I’m old enough to remember when the United Airlines slogan was: “Fly the Friendly Skies of United.” Now, according to Twitter wag GoodJuJu, the new motto is: “Our Service Will Knock You Out!” 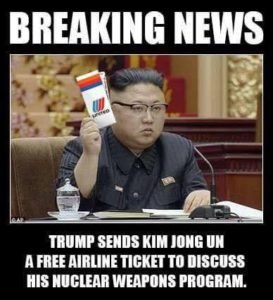 It’s a cinch the passengers on United Express Flight 3411 got more than they bargained for — I knew United was upgrading seating and entertainment on those annoying puddle–jumper jets, but that floor show looked like a Trump rally!

CEO Oscar Munoz’ response to the incident was so inept he may as well have let the cop who cold–cocked the passenger handle the news conferences. At least that guy had some impact. The only mistake Munoz didn’t make was announcing that in the future all United passengers will be required to turn their cell phones off when they get a boarding pass.

Munoz began Unitedsplaining by blaming 69–year–old Dr. David Dao for all the trouble, claiming he was “belligerent.”

Alternate motto: If You Don’t Need a Wheelchair Before You Board, You May Need One After!

As a PR person, I could have told Munoz he was going to have trouble selling that when Dr. Dao was an elderly, paid up, sober and seated passenger who just wanted to go home. On Monday a man claiming to be a United Express pilot called the Rush Limbaugh Show and, displaying the same concern for the paying customer that Munoz has, said, “Flying is a privilege.”

For pilots, yes. For passengers, no.

Flying for a passenger is a commercial transaction; not a boon bestowed on an unworthy recipient. In this case, the good doctor’s “privilege” was revoked for because the plane was overbooked.

Overbooking occurs when the airline sells the same seat more than once. The practice received official approval back when the Civil Aeronautics Board regulated airlines. (You can only sell a single item to multiple buyers when the government approves — think chair in a VA hospital waiting room — otherwise, you go to jail.)

Even if the spontaneous passenger paid before changing his mind, it was easy to get a refund and fly another time.

Meanwhile, the market changed but the government hasn’t. Why does that sound familiar? Passengers now pay extra to make a reservation on the phone, many tickets are non–refundable and the ones are refundable have a $250 change fee, plus added fare if the new flight is more expensive.

Even if overbooking was justifiable, United’s implementation wasn’t. Like many corporations, United supports the free market when it helps make money, but dislikes the market when it costs money.

Airlines raise prices as flight times approach because the few remaining seats are more valuable, but it wants to put a lid on prices when it needs to buy the seats back. Here United needed four seats and it began the bidding at $400 and a free hotel room with meal vouchers if the passengers gave up their seats.

Still no takers, but instead of going up to $1,200 to see if that would bring demand in line with supply, the airline bypassed the market and decided to use force.

That money–saving decision that cost United $1.4 billion in stock valuation after the public became aware of the incident.

Overbooking, like free checked bags, is a relic of the past. When fans don’t show up for football games the team loses out on parking and concession revenue, but even rapacious Dan Snyder doesn’t overbook Redskins’ games.

If overbooking is allowed to continue it should be as a percentage of the load factor and airlines should be required to keep bidding until passengers relinquish their seats voluntarily, not at gunpoint.

The load factor for domestic flights has been on a steady climb since 2002 when it was 70.4 percent. So far in 2017, the load factor is 84.6 percent. Jet fuel prices are down and ticket sales are up. It’s a wonder United has any frustrations to take out on passengers.

I’ve flown United since it was called Continental. It’s my airline of choice and my frequent flyer level is so high, there’s no chance of me being bumped. But I will say this: In the future, if I were a physician, I’d think twice before answering when a flight attendant asks, “Is there a doctor on board?”

Support Conservative Daily News with a small donation via Paypal or credit card that will go towards supporting the news and commentary you've come to appreciate.
Tags
David Dao overbooked United Airlines