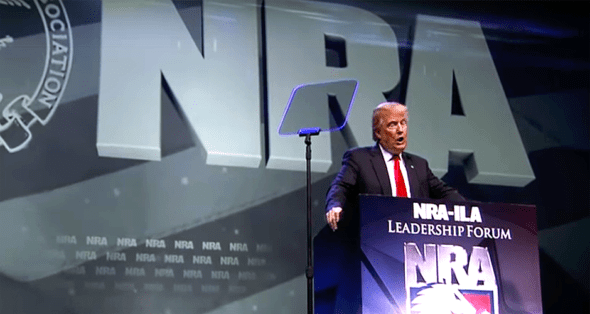 The president, along with a who’s who of gun rights advocates, will speak at the annual meeting in Atlanta, Georgia Friday.

The NRA heavily backed Trump during his 2016 campaign. The gun rights group spent three times as much money backing Donald than it did for Mitt Romney in 2012.

The last sitting president to address the annual forum was Ronald Reagan, who spoke to the group in 1983.

President Trump and the NRA have more in common than strong support for gun ownership. The NRA identifies itself as the protector of a way of life that the left is seeking to destroy. Suppression of free speech, religious liberty and the right to choose your own health care have been the focus of recent messaging from the group. NRA President Wayne LaPierre has made numerous speeches decrying the flow of illegal immigrants and drugs across the border. He has also lashed out against judicial activism among liberal judges.

Watch: Live Stream of President Trump’s Speech to the NRA

President Trump is a gun owner and his sons are both avid hunters.

After delivering his speech, the president will attend a private fundraiser for Republican congressional candidate Karen Handel. This is the first time that President Trump has taken on fundraising since taking office.

Support Conservative Daily News with a small donation via Paypal or credit card that will go towards supporting the news and commentary you've come to appreciate.
Tags
The NRA Trump Administration