There is no doubt that we are living in dangerous times. But the thing that people should be most terrified about goes unnoticed by a majority of people. It is not North Korea, or Syria, or Iran, or even ISIS although these are things we should all be concerned about. There are those in this country that think Donald Trump is the biggest enemy of America because he wants to make America great again, but they are idiots.

The biggest threat to America right now resides on our college campuses. Radical left wing students who are trying and are succeeding in shutting down free speech. They run around calling people Hitler-like and Fascists when they themselves are Hitler-like and Fascists. Hitler himself shut down speech he didn’t like and had people beat up and even killed if they dared have different views than him.

The First Amendment is the most important in the Constitution, that’s why it was put in first, because it is the most important our country has. Time and time again we see students stopping a speaker just because they don’t like what he has to say; many times they stoop to violence and destruction. People have a right to protest, but they don’t have a right to stop others from speaking because they don’t agree with what that person has to say.

“You gotta be real careful around here,” actor Tim Allen said on Jimmy Kimmel Live, “You get beat up if you don’t believe what everybody else believes. This is like 1930s Germany.” He was speaking about the Hollywood crew, who want to hear nothing but their own self absorbed views.

We see in the Wellesley College student newspaper where a student wrote an editorial stating the author sees as unfair allegations that Wellesley students and professors foster “an environment where free speech is not allowed or is a violated right.  Many outside sources have painted us as a bunch of hot house flowers who cannot exist in the real world.”

Yet later on she states; “hostility may be warranted” against those who “refuse to adapt their beliefs.” These students are pretty stupid; she does not even see the hypocrisy in her own statements. First she says the college is in favor of free speech, and then says they will do violence on people that disagree with them. For a $63,916 tuition, your kid can become a socialist as well. You have got to feel sorry for the parents of these kids.

At the University of California, the UC Davis Student Senate passed legislation revoking a long-standing rule that required the American flag “stand visibly” at every senate meeting. “It shall not be compulsory for the flag of the United State of America to be displayed at the ASUCD Senate meetings,” the new legislation declares.

All across this country students are being brainwashed into believing that America is and always has been a terrible place. People across this country should be terrified that our first amendment is under attack, when free speech goes, so does America. Patriotism is taking on a whole new meaning; you must think America is evil to be a patriot.

“What Kind Of Society Are We Leaving Our Kids.” Available here. 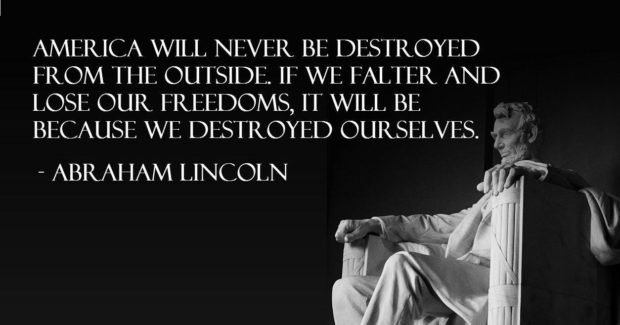