President Donald Trump is spending this weekend ‘in residence’ at the White House.

The president and First Lady left the White House in the presidential motorcade just before 1 pm Saturday en route to Walter Reed medical center where the president will give a purple heart to a recently wounded service member. Earth Day protesters were seen along the motorcade route with signs that read: “Stop denying the earth is dying” and “We Love Experts.”

Getting ready to visit Walter Reed Medical Center with Melania. Looking forward to seeing our bravest and greatest Americans!

President and Mrs. Trump then greeted Sergeant First Class Alvaro Barrientos and his wife Tammy. Alvaro is being treated at Walter Reed for wounds received while on deployment to Afghanistan. For his injuries, the president is presenting Sergeant Barrientos the Purple Heart. 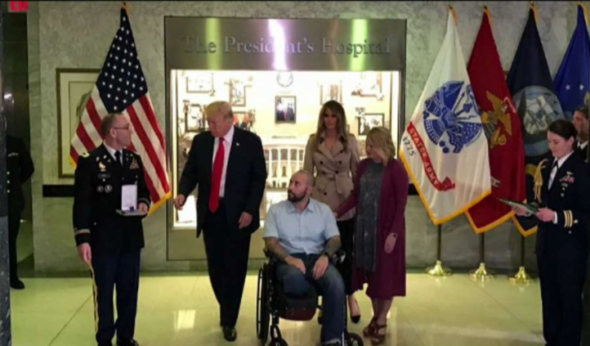 “When I heard about this I wanted to do it myself,” President Trump said. “Congratulations. Tremendous.”

The president then toured Walter Reed and met with other service members for about an hour and a half before leaving the hospital just before 3 pm. On the ride back to the White House, President Trump took to twitter to share a sentiment on Eart Day.

Today on Earth Day, we celebrate our beautiful forests, lakes and land. We stand committed to preserving the natural beauty of our nation.

Just after 8 pm, the presidential motorcade left the White House for Trump International Hotel. The president and First Lady were joined by daughter Ivanka Trump and Treasury Secretary Steven Mnuchin for dinner.

The president’s Sunday started with a call to Japan’s Prime Minister Shinzo Abe.

D.C. weather for Sunday holds a 0% chance for rain and a high of 63 degrees. I’d put good money on a golf outing later Sunday. Update: Press pool travel lid. POTUS isn’t going anywhere for the remainder of the day. Have a great Sunday and watch for Monday’s schedule which should get released by 11pm tonight.

We will follow the happenings at the White House and update this page if events warrant. Revisit this page often for updates.