The Heartland Institute’s 12th International Conference on Climate Change was nothing like I expected. When joining a group described in pejorative terms as “deniers,” one would expect to see furtive movements and disreputable haircuts, yet the crowd displayed good humor and a welcoming attitude.

Even the dour Washington Post, which sees potentially fatal darkness around every corner, described the event as “buoyant,” which will come in handy if the seas continue to rise on Al Gore’s Titanic–like timeline. 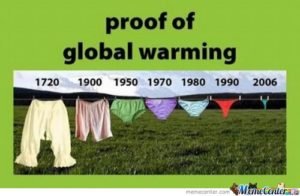 Spending time with climate realists shows an informed observer that what he should be looking for is not spectacular climate disasters visible just prior to his agonizing death. Trying to spot herds of tornados tossing Oklahoma into the Gulf of Mexico or perpetual heat waves leaving spontaneous combustion in their wake is simply a waste of time.

The momentous events that drive leftist climate policy aren’t something as mundane as the weather. What really counts are small adjustments to computer programs. Or as Patrick Michaels, director of the Center for the Study of Science at the Cato Institute, puts it, “He who controls the parameters controls the climate.” Or at least climate policy and how it affects the taxpaying public.

It’s why control–freak leftists are so passionate about the climate. Minute adjustments to confidential computer models produce dramatic disaster scenarios that can only be prevented by massive government control and intervention.

Earlier that morning Kevin Dayaratna, senior statistician and research programmer at the Center for Data Analysis, gave an example of parameter control. The EPA has determined the social cost of carbon is $36 a ton. This figure purports to represent the sum of the net damage across the world of adding another ton of carbon to the atmosphere.

An accurate cost “improves the efficiency of policy” and “putting a price on carbon is the only regulation needed.” But the key word is accurate and takes us back to Michael’s “parameters.”

The EPA price for carbon has been more volatile than Reince Priebus futures under Donald Trump. The cost started out at $21/ton, then jumped to $24 and has now peaked (until the next Democrat takes the White House) at $36/ton.

The price kept jumping not because the damage increased, but because the number was “a political decision.” According to Dayaratna, “The goal was a high price not justified by science.” To get their number EPA bureaucrats cooked the books and based the cost finding on “worst case scenarios” and a world that embraced “zero (carbon) mitigation.”

The EPA’s future featured self–driving Ubers powered by burning wood and a White House heated by dirty coal. The EPA couldn’t even be trusted to follow guidelines for discount rate set by Obama’s Office of Management and Budget. OMB recommended a 7 percent discount rate, but EPA’s calculations used 2.5, 3 and 5 percent, finally setting on the figure that resulted in the highest carbon cost per ton.

Dayaratna’s cost with little adaptation on the part of the government is $18/ton and with extensive adaptation $4/ton.

Obama’s lasting legacy is embedded leftist regulations. Even if Donald Trump issues executive orders overturning the EPA’s economy–killing regulation, they won’t take effect because green fanatics will file suit to stop implementation. Their argument will be Trump can’t overturn any of the EPA’s carbon regulations because the EPA has determined carbon is a pollutant. Reversing the “endangerment finding” is the only way to prevent this stalling tactic.

A reversal is only possible if the administration can prove the “endangerment finding” was based on faulty science.

Michaels compared an average based on 102 temperature models with the actual temperature at various altitudes in the atmosphere based over a number of years. The distance between the temperatures predicted by the models and the measured temperature looked like the gap between a husband’s opinion on the acceptable price for a sports car and that of his wife.

“Climate scientists” can’t admit the sensitivity in their models is wrong because then “you admit you’re wrong.” So they continue to use models calibrated to reflect 20th century climate exactly, but break down completely after the turn of the century.

The scientific solution is to change the carbon = pollutant hypothesis since observation doesn’t support it, but “climate science” isn’t science. It’s religion. Which is why the economy’s only hope rests on a carbon atheist in the Oval Office.

Support Conservative Daily News with a small donation via Paypal or credit card that will go towards supporting the news and commentary you've come to appreciate.
Tags
climate change EPA global warming Heartland Institute The Washington Post The Weather