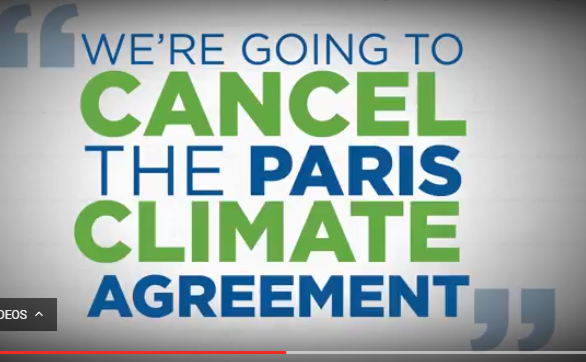 President Trump promised to pull the United States out of the Paris Climate Accord and now a new ad seeks to make sure he lives up to his campaign promise.

Today, White House senior advisers are scheduled to meet about the future of U.S. involvement in the Paris Climate Treaty, even though President Trump made a campaign promise to cancel the agreement. Since December 2015, the Competitive Enterprise Institute (CEI) has made the constitutional, political, economic, and moral case against the Paris Climate Treaty. This morning, CEI launched an online ad and petition asking President Trump to keep his promise and withdraw the United States from this harmful agreement.

“The Paris Climate Treaty requires the United States to make drastic cuts in fossil fuel energy use by 2025, which will raise energy prices and slow economic recovery from our decade-long slump. It also requires us to submit more ambitious commitments to reduce greenhouse gas emissions every five years,” said Ebell. “Failure to withdraw from the Paris Climate Treaty will make President Trump’s plans to undo Obama’s climate agenda vulnerable to legal challenges. The President should not listen to Washington’s Swamp, but rather keep his campaign promise to get the United States out of the Paris Climate Treaty and send it to the Senate for a vote.”

Support Conservative Daily News with a small donation via Paypal or credit card that will go towards supporting the news and commentary you've come to appreciate.
Tags
Paris Accord Politics