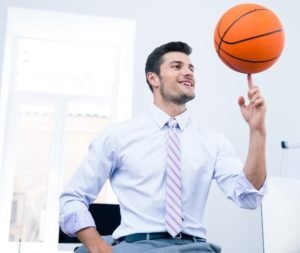 The study by Randstad US, one of the largest HR services and staffing companies in the United States, found nearly 9 in 10 workers (89%) agree office pools help build better team camaraderie and 58 percent completely or strongly agree. The survey found many positive side-effects of “March Madness” among Generation X’ers and Gen-Z’ers:

When it comes to the impact on worker productivity, the study found 76 percent of employees checked scores during work hours and 53 percent watched or followed sporting events on their computers while at work.

“While many employers fear a loss of productivity due to the distraction of office pools during the college basketball tournament season, our findings suggest the potential short-term distraction in the office may actually be a win for employee morale, engagement, and satisfaction in the long-term,” says Jim Link, chief human resource officer at Randstad North America. “Given the heightened competition for talent and the need for organizations to improve employee engagement and collaboration, our study indicates the significance of socially connecting with peers to foster deeper connections and boost employee morale.”

For Love or Money?

Interestingly, the Randstad survey found the motivation for participation is not the potential to make money. The study found 83 percent of workers who have participated in a college basketball pool said their love of sports is the main reason they participate. Comparatively, 75 percent said their main reason is to win money.

Other findings from the study include:

Support Conservative Daily News with a small donation via Paypal or credit card that will go towards supporting the news and commentary you've come to appreciate.
Tags
March Madness NCAA basketball