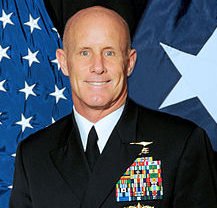 Update 2/16/17: Robert Harward has turned down the position.

Harward’s entry into the Trump administration comes as the previous National Security Advisor, Mike Flynn, resigned in the midst of allegations that he lied to the Vice President about conversations with Russian officials.

Most importantly, he is not an ideologue, as Flynn seemed to have become in the last few years. Harward thinks of himself as a national security professional — and indeed once served on the NSC staff, during the Bush Administration. Before that, early in the Afghan war, he headed the Special Operations task force in Kandahar.

Robert Harward, 60,  retired from the Navy in 2013, speaks English and Farsi and currently serves as the CEO of Lockheed Martin in the United Arab Emirates.

Harward is a heavily-decorated Navy SEAL having served as the platoon leader for SEAL Team 3 before becoming the operations officer at the Naval Special Warfare Development Group.

Harward continued his rise to Vice Admiral through commanding Naval Special Warfare Group 1 and taking command of major operations in Iraq and Afghanistan.

To kick off his retirement ceremony in 2013, Harward parachuted into the ceremony.

Mr. Harward is acclaimed by his peers both on the battlefield and in D.C.

James G. Stavridis, a retired admiral and former NATO commander, said Mr. Harward was “someone who will find a way to succeed no matter how daunting the task.”

“I have known him well for two decades, and have boundless admiration for his ingenuity, integrity and ability to navigate choppy seas — both operationally in the field and in the battlefield of Washington, D.C.,” said Mr. Stavridis

“He was a very good and effective bureaucratic player,” said Derek Chollet, an assistant secretary of defense under the Obama administration. “He understands the role the military plays within the broader tool set of American policy.”

Support Conservative Daily News with a small donation via Paypal or credit card that will go towards supporting the news and commentary you've come to appreciate.
Tags
Mike Flynn Robert Harward The White House Trump Administration