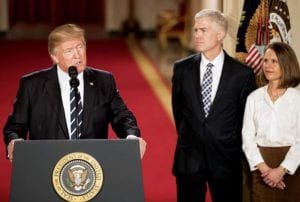 In a media event Tuesday night, Donald Trump told America that he had chosen Judge Neil Gorsuch as his Supreme Court nominee – this morning he told Senate Majority Leader Mitch McConnell to “go nuclear” to get him confirmed.

“Yes, if we end up with the same gridlock we’ve had in Washington for longer than eight years,” Trump said during a meeting with Supreme Court groups on Tuesday “If you can, Mitch, go nuclear. Because that would be an absolute shame if a man of this quality was put up to that neglect.”

The so-called nuclear option refers to the suspension of filibuster rules that would normally require 60 senators to vote to stop debate and vote on the nominee. Under the nuclear option, only 50 senators are required to advance the issue to a floor vote.

Support Conservative Daily News with a small donation via Paypal or credit card that will go towards supporting the news and commentary you've come to appreciate.
Tags
Mitch McConnell Neil Gorsuch