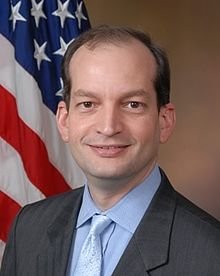 On Thursday the White House released a statement announcing the nomination of Alexander Acosta for Secretary of Labor.

Mr. Acosta has had a long and distinguished career in public service. He has served in three Presidentially appointed, Senate-confirmed positions, including as a member of the National Labor Relations Board. Mr. Acosta was the first Hispanic to hold the rank of Assistant Attorney General and went on to serve as the United States Attorney for the Southern District of Florida. Since 2013, Mr. Acosta has also served as Chairman of U.S. Century Bank, the largest domestically owned Hispanic community bank in Florida.

“Throughout his career, Alex Acosta has been a passionate advocate for equal opportunity for all Americans,” said President Trump. “His extensive experience has tremendously impressed me and my team and makes us confident that he will lead the Department of Labor with the utmost competence and determination to support the American worker. The American worker had been forgotten and left behind. That ended when I became President on January 20. Alex is going to be a key part of achieving our goal of revitalizing the American economy, manufacturing, and labor force. I call on the Senate to swiftly confirm this highly qualified and deserving leader so that he can get straight to work for the betterment of the American people.”

“I am deeply grateful and honored for the opportunity to serve my country,” Mr. Acosta said. “I thank the President and his staff for their confidence in me and I am eager to work tirelessly on behalf of the American worker.”

Support Conservative Daily News with a small donation via Paypal or credit card that will go towards supporting the news and commentary you've come to appreciate.
Tags
Alexander Acosta The White House