“The time for empty talk is over. Now arrives the hour of action,” the new U.S. President, Donald J. Trump, said in his inaugural address. And true to his word, his actions during his first week of office have been conducted at break-neck speed. While not everyone may agree with what he’s doing, he certainly can’t be accused of resting on his electoral laurels. His inauguration represents to many Americans much more than simply passing the presidential baton from a president to his successor. It represents a quantum shift in American politics.

The new populist president, defying previous political labels and norms, declared in his Inaugural Address, “Today’s ceremony, however, has very special meaning because today, we are not merely transferring power from one administration to another or from one party to another, but we are transferring power from Washington, D.C. and giving it back to you, the people.”

This was not hyperbolic, as evidenced by Trump’s first executive actions which were directed at Obama’s signature legislative “accomplishment,” Obamacare, or the Affordable Care Act (ACA). He ordered that “regulations already in place with regard to the Act be enforced with a softer, more beneficent tone, and that no penalty, fine, or tax be imposed by the IRS on any person or entity who is not complying with the individual mandate.” 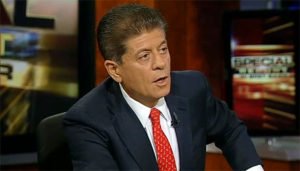 He then did something totally unprecedented and revolutionary in contemporary American political history. As constitutional expert Andrew Napolitano explains, “He ordered that when bureaucrats who are administering and enforcing the law have discretion with respect to the time, place, manner and severity of its enforcement, they should exercise that discretion in favor of individuals and against the government.”

This was a significant indication of how Trump views the role of government, compared to his predecessor. To Obama, the more government, regulation, mandates, and control of the masses, the better. To Trump, government is to serve the people, a truly revolutionary concept in this era of Obama’s big government. It’s so revolutionary, in fact, that we fought a war over the principle, which was also proclaimed and codified in our founding documents.

Barack Obama’s governance style was a two-edged sword. His nearly exclusive reliance on Executive Orders (EO) and Presidential Memoranda, allowed for the much more facile reversal of his edicts and ideologically driven policies. This allowed Obama to do much more than he could have done with the more legal and binding approach through legislative statute, but also made it much easier to reverse his policies, which Trump started the day he was sworn in. Further, Obama’s use of presidential prerogative through Orders and Memoranda set a precedent – one that Trump is obviously going to capitalize on. 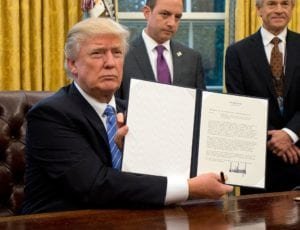 Many get caught up in the comparison of the number of Executive Orders Obama issued, versus prior presidents. The number is much less significant than the content and nature of those orders. For example, for six years Obama decried the fact that the Constitution proscribed his ability to modify immigration law unilaterally. He knew he needed legislative statute upon which to base an order with regard to those who enter the country illegally. Then with the stroke of a pen, he simply authorized then Secretary of Homeland Security, Janet Napolitano, to exercise “prosecutorial discretion” by implementing elements of the Development, Relief, and Education for Alien Minors Act (DREAM Act), which failed to pass congress. In other words, Obama, defying the constitutional limitations of his authority, created new statute by the stroke of his pen. Perhaps one of the most dictatorial and unconstitutional acts of any president.

While Trump hasn’t yet reversed that EO entirely, he did sign one to continue building the wall on our southern border, as authorized by the Secure Fence Act of 2006. He also reprioritized illegal migration policy by eliminating Obama’s “catch and release” policy, where illegals were caught, identified, and then released into the general population. He also started the crackdown on “sanctuary cities,” those municipalities that refuse to cooperate in the enforcement of federal statute with regard to illegal migrants. 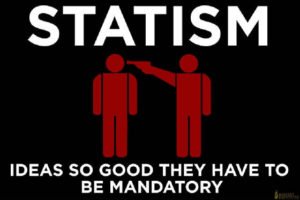 After the expansive and pervasive statism of the past eight years, with power and the long-reaching arm of the federal government dictating, regulating, and mandating to the American people, Trump’s early actions confirm that his primary interest is not himself or his aggrandizement, but rather the betterment of America. Consequently, his early actions have been directed to making the nation more secure, relieving some of the burden of oppressive regulation, and unleashing the inestimable power of America’s economic engine.

Trump also showed why he’s the master of deal making. The media has jumped all over him over his assertion that 2-3 million illegal aliens voted in the last election. And in their exuberance to prove him wrong, are actually encouraging an investigation into voter fraud. There’s perhaps no other way this anti-mainstream media populist president could get them on board to clean up our voter roles and improve election integrity. It was a brilliant move. 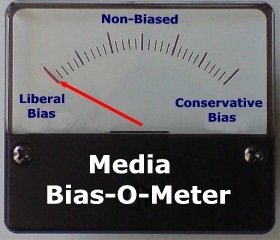 Speaking of his disdain for the media, the President rarely misses an opportunity to point out their liberal bias. In an interview with ABC Sunday, David Muir asked about the women’s march the day following the election. Trump turned the tables on him and asked why they provide such scant coverage to the March for Life in D.C. every year. The data confirm their biased coverage. The mainstream media provided 129 times more coverage the women’s march than the March for Life, according to Media Research Center.

In his first week Trump also reversed Obama by reinstating the Mexico City Policy, which forbids NGO’s (non-governmental organizations) from using taxpayer funds for abortions. He also put in place a federal government hiring freeze, declared a moratorium on new regulations from the federal government, and withdrew U.S. involvement in the Trans Pacific Partnership which he believes hurts American workers.

This is an unconventional president, whose positions and approach to problems are uniquely populistic and blur the lines of historical partisan delineation. And if his first week in office is any indication, he’s immensely pragmatic, energized, and results oriented. As he told a confab of Republicans this week, “It’s time to deliver.”

Support Conservative Daily News with a small donation via Paypal or credit card that will go towards supporting the news and commentary you've come to appreciate.
Tags
executive orders Politics