There is a new phrase that this generation seems to be endeared too, RACIST. It seems that everything and everyone that differs from their views are labeled racist. It must be a generational thing because I went through most of my life very seldom if at all hearing that word. The funny thing is, I can no longer go to a costume party today because anything I wear will offend someone and I would without a doubt be called a racist. Why if I dear to wear a sombrero, I am a racist and a bigot who hates Mexicans.

There was a term I remember from years ago, “Imitation is the sincerest form of flattery.” Not true anymore, God forbid I should go to a costume party dressed as an Indian. Which brings me to my childhood, a bunch of guys used to get together and play cowboys and Indians and we had fun, we had no malice intended, just a bunch of kids having fun. Do that today and the parents find themselves in family court for child abuse?

A while back I read a story about a black woman who worked as a cook in the cafeteria of a corporation, every now and then they would have a themed lunch. She would cook spaghetti for Italian Day, Tamales for Mexican Day and so on. One day she had the idea for an African Day, so she cooked fried chicken, collard greens and black eyed peas. Wouldn’t you know she was called a racist and almost lost her job. If that makes sense to you, get yourself some help.

I don’t get it, 50 or 60 years ago nobody was a racist, now everyone is. Something is wrong with society today, a generation that calls everyone a racist is a sad case for a generation. A racist is defined in the dictionary as: Having or showing the belief that a particular race is superior to another. Someone is going to have to explain to me how wearing a sombrero makes someone a racist, or cooking collared greens for African Day makes that cook a racist?

I am willing to bet that 99% of the time, if someone calls someone or something racist, it has nothing to do with the definition of what a racist really is. I was born and raised on the Lower East Side of Manhattan in New York City and you learn early to keep your nose out of other peoples business and keep your mouth shut, I think today’s generation would be better off learning that, instead of seeing imaginary racists around every corner.

I feel sorry for today’s generation for more reasons then I’ve stated here, they are just so out of touch with reality. I am sure there are those on the Left who will call me a racist for writing this article, but I don’t care, after all a person can be called worse things. 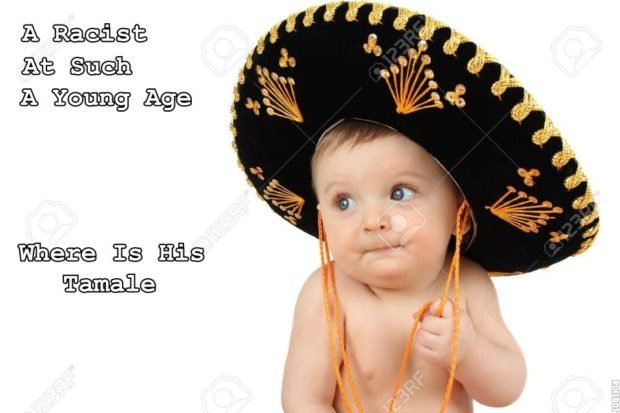 Support Conservative Daily News with a small donation via Paypal or credit card that will go towards supporting the news and commentary you've come to appreciate.
Tags
Politics Racist: A Catch Phrase For A Generation