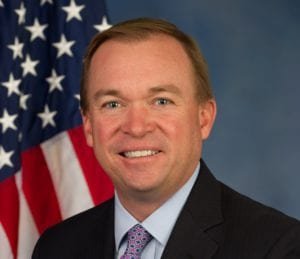 In a statement, Trump said that Mulvaney will be focused on “reining in out-of-control spending, fighting government waste and enacting tax policies that will allow working Americans to thrive.”

“We are going to do great things for the American people with Mick Mulvaney leading the Office of Management and Budget,” said President-elect Trump. “Right now we are nearly $20 trillion in debt, but Mick is a very high-energy leader with deep convictions for how to responsibly manage our nation’s finances and save our country from drowning in red ink. With Mick at the head of OMB, my administration is going to make smart choices about America’s budget, bring new accountability to our federal government, and renew the American taxpayer’s trust in how their money is spent.”

Mulvaney said that he will be working with Trump to “restore budgetary and fiscal sanity back in Washington”.

“Each day, families across our nation make disciplined choices about how to spend their hard-earned money, and the federal government should exercise the same discretion that hard-working Americans do every day,” Mulvaney said.

The nomination to be director of the White House Office of Budget and Management will require Senate confirmation.

According to a statement on Trump’s transition website, “Rep. Mulvaney attended Georgetown University where he graduated as an Honor Scholar — the highest award given to students of the Georgetown School of Foreign Service — in International Economics, Commerce and Finance. After college, Rep. Mulvaney attended law school at the University of North Carolina at Chapel Hill on a full academic scholarship. He then completed his formal education at Harvard Business School’s OPM program in 2006.”

Support Conservative Daily News with a small donation via Paypal or credit card that will go towards supporting the news and commentary you've come to appreciate.
Tags
Mick Mulvaney Trump Administration