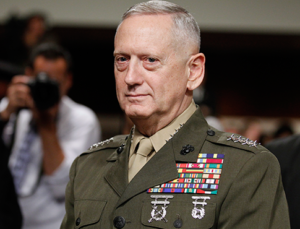 Donald Trump kicked off his USA Thank You Rally in Cincinnati, Ohio and during the oversold event, he announced that General “Mad Dog” Mattis would be his pick for Secretary of Defense.

President Obama appointed General Mattis to replace General Petraeus in August 2010.  Mattis had previously commanded United States Joint Forces Command from 2007 to 2010 and served concurrently as NATO’s Supreme Allied Commander from 2007 to 2009. Prior to that, he commanded I Marine Expeditionary Force, United States Marine Forces Central Command, and 1st Marine Division during the Iraq War.

Gen. Mattis is well known in the ranks of the U.S. military as a true leader and incredibly effective war fighter.

While Mattis is arguably an excellent leader of fighting men, some of his world views are at odds with current American policy.

Mattis reportedly supports a two-state solution as a resolution in the Israel-Palestinian conflict. This model decries the Israeli settlements on lands that belong to them after Israel defeated Arab aggressors during the 6 days war of 1967.

As he is being nominated as Secretary of Defense and not Secretary of State, his differing views on Palestine will likely not come to change American policy towards its ally in the middle-east.

Support Conservative Daily News with a small donation via Paypal or credit card that will go towards supporting the news and commentary you've come to appreciate.
Tags
Cincinnati James Mattis Ohio the Department of Defense Trump Administration