Schumer said on Monday that Donald Trump’s elevation of Steven Bannon to a senior role at the White House means that many “dangerous and bigoted ideas will have a seat at the table.”

Oops, not THAT Schumer – Future Senate Minority Leader CHUCK Schumer said that (although the two are reportedly distant relatives.)

While comedienne Amy Schumer has decidedly weighed-in on her disdain for Trump, she probably doesn’t know, nor does she care, who Steve Bannon is.

Chuck Schumer, on the other hand, has decided that the identity politics of the failed Hillary campaign – racism, sexism, whateverism – is exactly what the DNC should double-down upon.

If allies or aides to the president say anything that demeans a group of Americans, we won’t hesitate for a moment to demand that our new president condemn those comments. And already we have reason to. Steve Bannon’s appointment to a senior White House post signals that many of his dangerous and bigoted ideas will have a seat at the table in the White House,we will be watching. And everyone here will be ready to actively stand up for one another if ever one group is attacked.

Except.. I don’t remember Schumer defending the police, conservatives, non-minority victims of violence or much of anyone else he didn’t see as a voting block.

The left has abandoned making Donald Trump a target as he is now the hero of the middle class. Working people with families disagree with the liberal elites and those Oligarchs can not have that!

So what does the Oligarchy do when their prized pets abandon them?

Tell them that their new friends are ugly… or something.

But on Good Morning America, Reince Priebus defended incoming White House strategist Steve Bannon against accusations that he sympathizes with white supremacists by asking the public to give him a chance, saying, “This is a very, very smart person. I don’t know where they’re coming from,” he said of the critics, “That’s not the Steve Bannon that I know.”

This attack on Bannon is nothing more than a play for power against the Trump administration and a strategy for the mid-terms in 2018. Schumer knows he has no leverage today, but he could build a little if he can paint republicans as whatever-ists.

As Obama reminded us in 2008, elections have consequences and Chuck .. you have some crow to eat. Eat happy.

Personally, I hope democrats make a full court press with racism and sexism as their only messages. The rest of us work for a living and can’t afford their ridiculously errant policies.

Obamacare cost my family over $400 a month more to have worse insurance than we had before. I would rather be buying my kids jeans and backpacks with that money – thanks, CHUCK!

Crappy trade deals have sent jobs overseas and made cheap imports the way of the future. While Wal-Mart may rejoice, the rest of us just want jobs – THANKS, CHUCK! 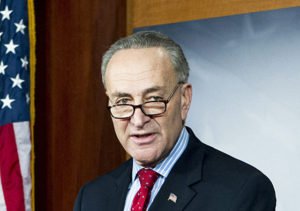 Democrats didn’t lose this election because of racist, misogynist, anti-gay voters coming out in huge numbers. They lost it because they have only been talking about crap none of the real America cares about. We need jobs, can’t afford your programs and, in all honesty, don’t like you … CHUCK!