The DNC is throwing absolutely everything at a soaring Donald Trump to see what negative news might stick, but the latest polls from battleground states show no mercy for the vastly unfavorable Hillary Clinton.

Democrats staged a P.R. event disguised as the coming-out of an anonymous sexual assault accuser – then canceled it, Hillary has turned into Triumph the Comic Insult Dog slinging every negative reference she can muster at Trump’s character, and worst of all, Senator Harry Reid actually invented an FBI investigation into Trump that doesn’t exist. Nothing the desperate left has tried has worked and the latest polls show it.

Battleground polls swinging so wildly towards Trump indicates that pollsters are realizing that their 2012-based turnout models aren’t working in 2016. Black voter turnout is extremely low and Democrats aren’t enthusiastic about Hillary (250 person rallies anyone?)

What could be causing pollsters to adjust their models so rapidly? Absolutely terrifying early voting ballot returns – terrifyingly terrifying. 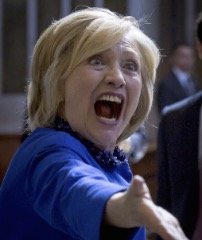 A major issue for Hillary is that while states like New Mexico, Colorado and Nevada are showing good numbers for democrats in early ballot returns, no one will know if those ballots are being cast for Jill Stein, Gary Johnson, Hillary or possibly as write-ins for Bernie Sanders.

Polls will continue to sway towards Trump as polling firms realize they’ve oversampled the wrong groups and locations either because they wanted to mislead or because they misunderstand what’s happening in this year’s election.

The most important poll, which is also likely to surprise the prognosticators, will close on November 8th and actual voters will be the only participants.

School District Is Requiring Its Employees To Call Students By Preferred Pronouns, Names