After the 2016 presidential election, a new Rasmussen Reports national survey found that 55% of likely U.S. voters favor eliminating the Electoral College so that whoever wins a majority of the popular vote wins the election – without understanding how much of an awful idea that actually is.

Interestingly given the election results, 58% of Republicans, heading into Tuesday night, were slightly more supportive of eliminating the Electoral College, compared to 55% of Democrats and 51% of voters not affiliated with either party. Since the election, many of Clinton’s supporters have openly called for the system to be eliminated.

So why is abolishing the electoral college such a terrible idea?

And then there are the maps…

Every Republican “forgotten person”, stuck in a firmly democrat state, should pull up the 2016 election map of their state that shows how every county/precinct/district voted on November 8th and then ask .. if that map doesn’t make sense, why would you want that same problem magnified on a national level? Here are some particularly instructive examples: 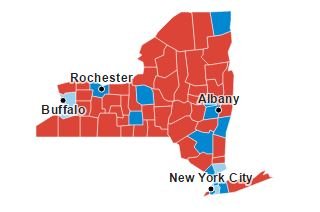 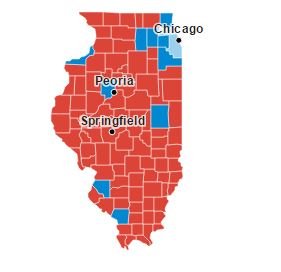 Maine (awarded the majority  of its electoral college votes to the blue candidate (Hillary): 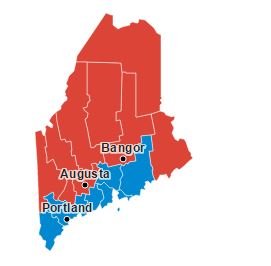 Looking at how those districts/counties/precincts voted, you’d think those states went for the red candidate, but we all know that didn’t happen and isn’t likely to ever happen as long as population centers like New York City, Chicago, and Portland decide for the whole of the state – but that’s fair … right?

Here are the 2012 presidential election results by precinct:

Who do you think won that election? You guessed it – the Democrat (represented by blue areas)

Anyone looking at the map would ask how the heck Obama won that election.. the answer is that the 44th president of the United States ran a popular vote campaign in states that mattered. He spent resources in urban areas so that that concentrated mob could overwhelm the voices of the rest of their states. President Obama didn’t need to win the majority of areas, just the large city centers in those states with lots of electoral votes. The problem wasn’t the existence of the national Electoral College, it was that states have not adopted their own versions of it.

The founders of the nation studied the history of the Greeks and Romans and knew that pure democracy always led to the majority disregarding the will of the minority. Basically, once you go full on sheeple and are part of the 50.1% coalition, you could implement anything you wanted, the rest of the country be damned!

If you live in a blue state but live in a  red county and vote Republican or live in a rural area of a liberal bastion, you know exactly how this feels.

The founders understood this phenomenon and sought to prevent it on a national level.

Imagine if the entire election were decided by New York City, Los Angeles, Chicago, Raleigh, Miami, Austin, Cincinnati, Detroit, Philadelphia, Boston, …  you get the point. Politicians would only care about the needs, desires, and demands of the people in those cities. No one else would matter. The huge population centers would decide everything for everyone even if those choices were destructive to others – to a point.

So what happens when certain areas become so entrenched in group-think that they don’t know how to do anything but support their group’s messages? What happens when a state fully ingests the party line and believes that no outcome, save one, is possible? They become irrelevant.

New York’s requests are ignored by D.C. as democrats know that New York’s non-NYC areas won’t come out in large numbers to vote in national elections because New York City will silence voters across the rest of the state.

Similarly, Californian conservatives will be hard to mobilize as they know Los Angeles and San Fransisco’s progressively-indoctrinated population decides how the state’s electors go.

This is the tyranny of the majority that pure democracy fosters.

Perhaps the answer isn’t that the national Electoral College needs to end, but that states need to implement something similar.

Support Conservative Daily News with a small donation via Paypal or credit card that will go towards supporting the news and commentary you've come to appreciate.
Tags
National Popular Vote the Electoral College